30 Shades of Green - an Irish Golfing Odyssey by Wesley Boudreaux

He arrived today, at Dublin Airport, with an ambitious - some might say crazy - goal in mind. To play Ireland's Top 30 golf courses over the next three weeks. Wesley Boudreaux isn't stopping there, though, as he's playing plenty of other courses while he's here. In total he will play 42 rounds of golf in 22 days, enjoying the best courses that Irish golf has to offer.
Now we all know that the American kamikaze tours are well able to take in 36 holes a day, but not for 22 days straight, and not considering everything else that Wes has planned. 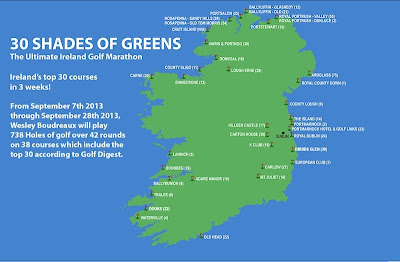 His website bears testament to his ambitions. The scratch golfer is raising money for charity, he's taking photographs and video everywhere he goes, he's blogging, he's writing a book and he's driving a rental car around the entire perimeter of Ireland. Oh, and he'll be driving from The Island to Lough Erne and then back to Dublin so he can attend the Roger Waters - The Wall concert. There's some sightseeing too as well as watching the All Ireland Hurling Final. I'm not sure when he's going to get time to sleep, if he sleeps at all. I imagine he will be one exhausted golfer on the flight home to the USA on Sunday 29th September.

You'll find his full schedule here (scroll down below the map).

He's hoping to sell some of his photographs too, so check out the impressive rig that he's created for his Sun Mountain Micro-Cart (trolley). There's a camera, a video and an extendable pole that can take photos from 15 feet up. He's converted a ball retriever for that purpose. He's got a bigger camera as well, and with some of the stunning Irish vitas he's going to encounter, he'll need a wide, wide lens!

He's using Golf Digest's ranking to select the top thirty golf courses so he'll certainly be visiting the highest profile courses we have to offer, such as Adare, Ballybunion, Carne, Rosapenna, Lahinch, Killeen Castle, Royal County Down and... the list goes on and on. Take a look at his schedule and if you happen to be in the neighbourhood, pop by and say hello, wish him luck and give him a can or two of Red Bull - he's going to need it. Based on his equipment and his fashion flair, he won't be difficult to spot!


Keep up to date with how he's doing by visiting his website: 30 Shades of Green and if you want to donate to one of his chosen charities, there's a page for that too.
Posted by Kevin Markham at 2:26 PM