The miracle of Medinah remains fresh in the mind of many a golfer. The Ryder Cup in Chicago was as fiercely a fought battle as you could hope for, and it will undoubtedly
become one of those classic encounters referred to for generations.

Ian Poulter, this week’s winner of the HSBC-WGC Champions Tournament at Missions Hills, China, epitomised the European spirit, displaying fighting qualities that have made him the stuff of legend. On those three days he proved he had the Midas touch.

Poulter has been the touring pro for Woburn Golf Club in Buckinghamshire since 2003. It’s a venue that has a Midas touch of its own, wrapped up in the Woburn Abbey Estate. It boasts three golf courses, which have all been included in Golf Monthly's Top 100 courses in the UK and Ireland. It doesn’t take long to appreciate why. 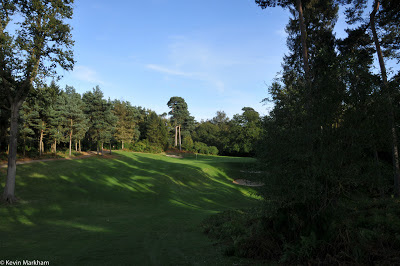 [Photo: approach to the Marquess' 9th]


This is a tree-drenched wonderland for golfers. The feeling of maturity runs deep, so it comes as a surprise to learn that the first course only opened in 1974. The trees make the courses, but the landscape has some unexpected twists and turns, while the drive through the woods to reach the course creates the perfect appetiser.


It is difficult to compare the courses to anywhere in Ireland. Every now and again there are hints of courses, from Adare to Fota Island to Malone and Headfort. It is the scale, denseness and proximity of the trees that make Woburn's three courses so individual, and it's not something we have over here.

The Woburn Estate
The golf club is part of a rolling estate stretching over 3,000 acres. Golf may not even prove the biggest lure with Woburn Safari Park, Woburn Abbey and the Woburn Inn, all wrapped up in this quiet corner of Home Counties countryside.

Woburn Safari Park keeps over 80 species of animals, including lions, tigers and bears, and it is as focused on conservation. The house at Woburn Abbey has been the home of the Dukes of Bedford for nearly 400 years, while the Abbey itself dates back to 1145. The Woburn Inn is a glamorous yet distinguished hotel, combining modern design with 18th century architecture. It can be a golfer’s retreat or a family’s paradise, and cottages are available across the courtyard.

The estate is an hour’s drive from the centre of London. 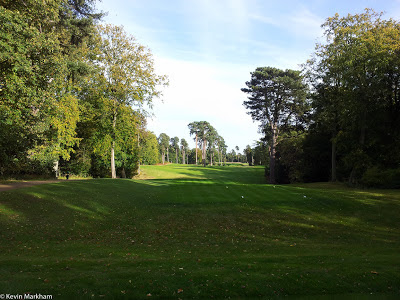 [Photo: the par five 'Signature' 7th on the Marquess' course]


Course 1: The Marquess’
My golf started on a sunny October day, on the Marquess’. Dave in the Pro shop recommended I play the newest – and longest – course first, and I was instantly swamped in the tall oak, beech, pine and chestnut trees that embrace every fairway. Sweet chestnuts lay among the autumn leaves along paths and on tee boxes, while squirrels amassed their winter stockpile paying little heed to the passing golfers. Their chatter was one of the few sounds to be heard as the holes moved idly across the landscape.

There is a definite sense of scale about the Marquess’. Designed by a quartet of golf architects – Peter Alliss, Clive Clark, Alex Hay and Ross McMurray – the course opened for play in 1999. It has many of the features associated with the modern game and modern design: shapely, perfect greens; length (7,214 yards from the back tees); generous landing areas; and elegant curves, both in the shape of the fairways and in their direction. The trees create spaces, as well as constricting fairways and give the holes their definition.


The 7th is the course’s signature hole, a par five of magnificent scale that shows you everything from the tee but teases you with choices, thanks to a stand of trees that splits the fairway. A recent YouTube video shows Ian Poulter alongside trick-shot expert, Geoff Swain, proving that doing ridiculous things with golf clubs and balls comes naturally to a maestro like Poulter. They’re on the Marquess’ 7th tee.

Full set of photos of Marquess' 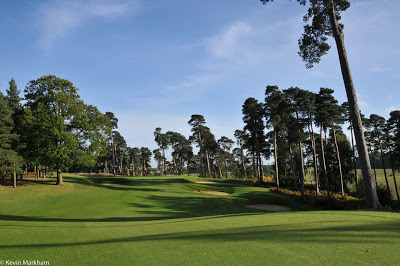 [Photo: the approach to the Marquess' par five 7th]

The original course dates back to 1974, but by the time you walk off the acclaimed par three 3rd – recently selected as one of the top 500 holes in the world – in its deep nest of rhododendrons, you’ll imagine it has been here for a hundred years. The course is shorter than the Marquess’, but it still measures an impressive 6,976 yards from the back tees. 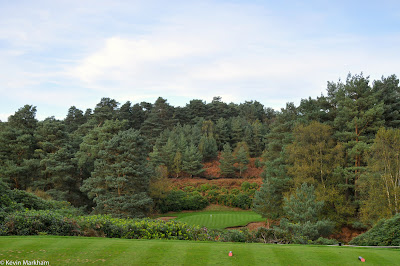 
Even from the forward tees (6,554 yards) it is a daunting task with tighter fairways and tougher tee shots. Dominated by pines and birch, and blessed with a constant feeling of isolation, this is a course that requires careful calculation. Consider that the 4th is a mere 395 yards and it is Index 3, while the 6th, a par three of 207 yards, is Index 15. The trees will rattle you on several holes, but so too will some heavily tiered greens. Of the three courses it is the Duke’s that has hosted the majority of major championships. It has hosted the British Masters (11 times) and the Women’s British Open (8 times), so you’re playing on fairways where Ballesteros, Faldo, Norman, Karrie Webb and Christy O’Connor Jnr walked and won.


Full set of photos of Duke's 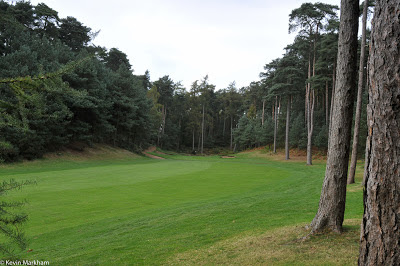 [Photo: the approach shot to the par four 4th]


Course 3: Duchess’
The Duchess’ opened in 1979. Today, it is usually regarded as third in line, but that would be unfair to a course that, while the shortest (6,651 yards from the back tees), is constantly referred to as the prettiest. It shares the same woodland remoteness as the Duke’s but fairways are tighter still, and balls disappearing into the woods will see you in deep trouble. If you thrill to careful shot-making, in preference to flashing away with the driver, then the Duchess’ is no end of fun as you encounter unexpected dips and hollows. Greens are surprisingly small and often difficult to attack thanks to some sharp slopes across fairways. Of the three it requires the most guile. 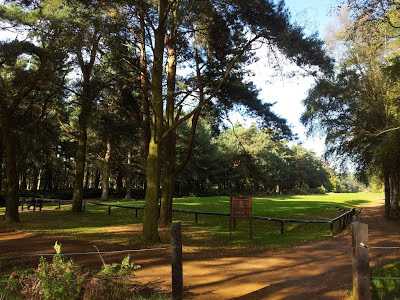 [Photo: the 1st hole at the Duchess' stretches into the distance]

The Facilities and Packages/Green Fees


The clubhouse is as impressive as the courses, with comfort and open spaces and one of the best stocked Pro shops I’ve seen. The practice facilities are myriad, with an entertaining horseshoe shaped putting green on the way to the 1st tees.

Special golf packages (including lunch) start at £135, which, between November and March include unlimited golf. Golf breaks, through the Woburn Inn, start at £260 and include one night's accommodation, full English Breakfast, a £35 dinner allowance and two rounds of golf.


The Woburn Golf Club has so much to offer - it's three courses are sublime and it has the Estate wrapped around it which makes it a very peaceful place to play golf and enjoy some R and R.
Posted by Kevin Markham at 8:11 AM