Lough Erne Resort and the G8

Congratulations must go to the Lough Erne Resort which will play host to the G8 Summit next June. That's no small feat given all the trials and tribulations that the resort has been through and the rest of the economy has been experiencing. 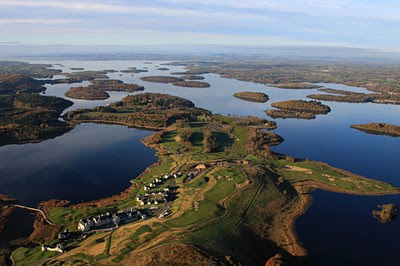 David Cameron made the announcement on Tuesday, during a visit to Northern Ireland, and there was a loud cheer after he had finished. Is it any wonder! The entire county of Fermanagh will be booked solid and hotels for miles around will be full. If you look on Twitter, hotels in the region tweeted that they were booked out within hours. The resort has 120 hotel rooms and 65 houses, which should be just about big enough for the British contingent, although Dave may make way for Barack.

Hopefully golf courses will grab their share too, although I don't fancy anyone's chances of getting out on Lough Erne during the event. Will Obama tee it up during his stay? There isn't a basketball court at the resort so chances are he'll walk over the pontoon to the 1st tee and enjoy Nick Faldo's impressive course. And will Faldo and/or Rory pop along to play with the President? 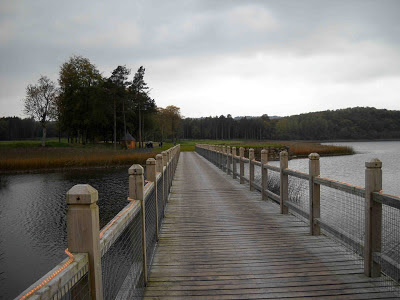 [Photo: The pontoon bridge across to the 1st tee]

It's hard to believe that that Lough Erne's golf course only opened officially in 2009 (the hotel opened in 2007). With Rory sporting the logo on his shirts it feels like it has been around a lot longer. But the same can be said of Rory.

The golf course is a spectacular beast - manicured, of course, but with natural, wild flourishes everywhere and the lough constantly in view... and often in play. There are three men's tees:
Black (7,167 yards)
Blue (6,241 yards)
White (6,241 yards)
Yellow (5,686 yards)

I think we'll exclude the Yellows for now - why would you want to play a par 72 that short! 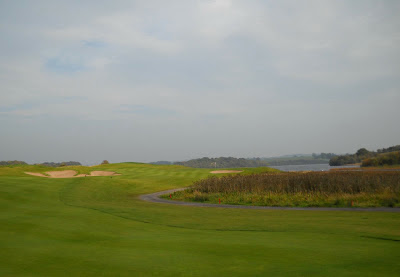 Banks screwing up? Whoever heard of such a thing!

The Lough Erne Resort was the brainchild of Jim Treacy (who put in £10 million himself), but with the exposure the G8 summit will receive, maybe he'll see this as the perfect opportunity to buy back Lough Erne Resort.

Posted by Kevin Markham at 8:10 AM