The Golf Promotion Night at the Burlington was an interesting affair. 66+ eager beaver golf clubs came from across the country to sell their wares, society packages and green fees. Until now, the event has been held in Belfast for the last 20 years or so, and this was the first time it was in Dublin – so naturally there was a buzz around the place.

I had a long list of people/clubs I wanted to see and had given myself 90 minutes to press the flesh. Over two hours later and having only seen half the clubs/organisations I wanted I had to leave. So, apologies to Glasson, Roganstown, MyGolfTrip.co.uk, Doonbeg, Blainroe, The Island, Concra Wood, Dooks, Rosapenna, Mount Wolseley and The Curragh, among others.

Prizes were excellent, with all clubs in attendance chipping in – from fourballs to a five-day membership (Lisheen Springs) – but it has to be said that the microphone system would have given a train station tannoy a run for its money. I could have won every prize and I wouldn’t have known. That said, Ally McIntosh, the golf architect won the first prize of the night. McIntosh has designed the new 9 holes at Carne, which will be opened next year.

The night was aimed at societies primarily, and one early conversation I had revealed that a booking for 70 golfers was already in the offing. I hope there were plenty more, but the footfall was steady rather than spectacular. 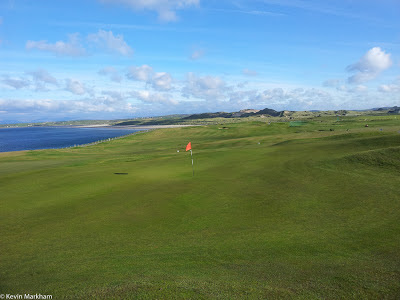 [Photo: Bundoran's 12th hole, green to tee, and the views beyond]

Failte Ireland’s marketing covered many bases, including letters to all golf clubs, radio advertising, press releases to the newspapers and some online advertising, as well as tying in with MyGolfSociety. I was surprised therefore by the footfall. With all those prizes and the excellent value on offer I expected the place to be teaming with people. No doubt there will be further marketing opportunities – Social Media especially – next year.

Some of the Golf Offers (price per person) worth mentioning:

Bundoran Society rates range from €25 to €30, and there are several deals with local hotels who cater to societies of all sizes.

Carton House Society rates range from €50 to €70… but if you book before 31/1/13 and mention the Failte Ireland Golf Society Night Special you’ll get : a 10% discount; a fourball voucher for Carton House (groups over 20 only); and a season ticket for the Irish Open 2013.

Donegal Society rates range from €40 to €50 with Main Course Dinner.

Glen of The Downs Society rates start range from €25 to €45.

The Heritage is offering Society’s rates from €35 to €55, although you can also enter the Open Singles Competition on Mondays, at €25 per person.

Mount Juliet Society rates start from €60, with a free overnight stay for two for the group organiser.

Mullingar will be hosting an Open Singles Competition every Friday between March and October, 2013, for €20. Society offerings start at €30, rising to €60 (w/e with steak diner).

St Helen’s Bay Society rates start at €29 for golf and a meal.

Waterford Castle rates for Societies range from €25 to €45 (includes all day breakfast).

Golf Graffix were also there, showing off their new golf simulator. And a beauty it is too, partly because of its minimalist size, partly because it’s easy to use and partly because the graphics on the screen are excellent… and it’ll retail for approx. €400, assuming you can get your hands on one. 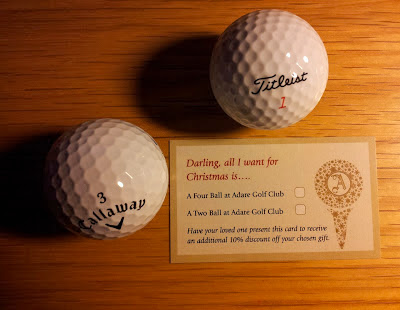 [Photo: a clever business card ploy of Adare’s. I love the idea of a golfer casually leaving this on the kitchen table.]

Let's hope Failte Ireland and Golf Ireland hold another Golf Promotion Night next year, and also give consideration to some Regional events which would be more likely to attract local societies.
Posted by Kevin Markham at 8:01 PM