The Longest Shot by Neil Sagebiel – A Book Review 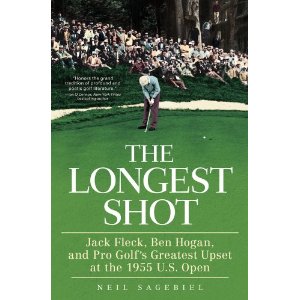 We’ve all had dreams of sporting glory... going toe-to-toe down the finishing stretch against Tiger Woods at the Open Championship or the Masters... and beating him with a moment of pure brilliance on the final green. The crowds rise and goosebumps ripple along your arms. Yes, the underdog, the complete unknown, the mission impossible beats the world’s greatest golfer. Come on, admit it – you’ve fantasised about it. We all have. Most recently I cruised past Usain Bolt in the Olympics to take the 200 metres in a new world record. Well, you would, wouldn’t you. Look, if you don’t have the ability then imagination is the next best thing – everyone’s a winner in their daydreams.

Back in 1955, that underdog, that complete unknown became the biggest story in golf and delivered one of the greatest upsets in the game. It was the US Open and it pitched the mighty Ben Hogan against an Iowan by the name of Jack Fleck.

The Longest Shot is the story of these two men’s paths to the Open and their ensuing battle (over an 18 hole play-off). Ben Hogan was looking to finish his remarkable career in style while Jack Fleck was looking to make a pro career a reality.

The author, Neil Sagebiel (of the Armchair Golf Blog), met Jack Fleck – now in his 90s – and decided to write the story of golf’s greatest underdog. The story is one of grit and determination, on the part of both men, and anyone who swings a club will empathise with the mindset of Fleck as he tries to make a name for himself. Sagebiel gets under Fleck’s skin so that you can understand the man’s work ethic as well as his hopes and dreams. That is what is at the heart of this book... the battle at Olympic in San Francisco was the mere culmination of the man’s drive for success.

A vast quantity of research went into this book and that is where my only frustration lies – frustration at myself I must add – I simply can’t keep up with the names and dates of all the characters involved. Sagebiel introduces you to a multitude of players from that era (Littler, Rosburg,  Furgol, Middlecoff among them), setting the scene and lining up the players who had a real shot at the US Open, which was to be played over what was widely regarded as one of the most difficult ever played. Just reading about the course conditions instills a level of fear. (This year’s US Open was held at the same venue.)

The battle at Olympic is remembered more for Hogan’s loss (he was going for a record fifth win) than Fleck’s win, but Sagebiel makes it abundantly clear that it was the brilliance of Fleck over the final round in regulation, as well as the play-off on the following day, that led to his victory. Hogan fought all of the way but simply couldn’t match Fleck’s game.

The story is told in an easy style, comparing the two men in their very different golf worlds. It gives a taste of what pro golf involved in the 1950s, something that is almost unrecognisable from today’s ‘celebrity’ environment. For starters, in 1955, the final two rounds were played on the same day.

The other touch that the author brings to this inspiring tale is that at different times you find yourself rooting for each of the golfers involved. Nicely balanced, in other words.

Fleck is the oldest living US Open Champion. Read the book and you’ll discover what has been driving him all of these years, and then slip back into a daydream... the Ryder Cup is only just around the corner after all.
Posted by Kevin Markham at 7:44 PM