Tralee - murder of the cliche 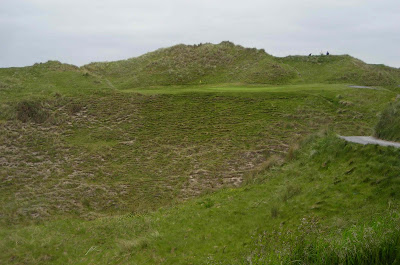 [Photo: Tralee's stunning 13th, a par three that perches on a dune]
First things first: congratulations to Tralee Golf Club in its rise from 10th to 7th in the Golf Digest Ireland 2011 Top 100 Courses Rankings. It's a spectacular course with some remarkable views. And with some benign weather around at the moment, the green fee's a snip at €50.
Anthony Byrne is the General Manager, and I'm going to have a gentle dig at something he said which appeared in the Irish Times the other day... he knows how much I like the course (a photo of Tralee's 16th was the front cover of Hooked - 1st edition) and he was kind enough to comp me and a friend when I was on my travels, so, if he ever reads this, he knows it's all in good fun: [Photo: the approach to Tralee's 10th hole, a dogleg left par four]
Tralee's 10th hole is going to be remodelled and the Practice Academy is to be updated. In describing the changes, Anthony decided to take a worn-out golfing cliche, bring it back to life briefly and then murder it again.
“We know that we have a priceless jewel here in Barrow and you must never, ever, allow a priceless jewel to lose any of its lustre,” he said.
I agree with the sentiment wholeheartedly, but sometimes a cliche this bad deserves to stay dead and buried.
I look forward to seeing the new 10th... if I'm ever allowed on the course again!
Posted by Kevin Markham at 11:14 AM