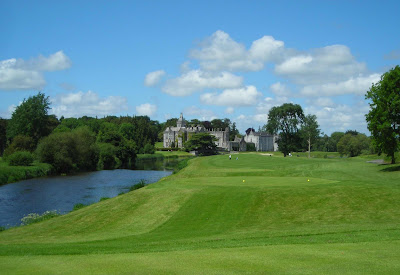 [Photo: Adare's par five 18th. The course is ranked 10th in Ireland]
I was invited onto the Saturday Sport show to discuss the merits & shortcomings of the recent Golf Digest Ireland Top 100 course rankings. Des Cahill, Greg Allen, myself and Linton Walsh, the magazine's editor, were gathered around the desk. It was fascinating to hear, direct from the horse's mouth, how the ranking process worked.
There are problems implicit in any ranking process: ask one person and it is too subjective; ask 50 people and the result is diluted. As an example, if you asked 20 people to rank Mount Juliet, and ten said it was No. 1, and ten said it was No. 100, what do you do? If you divide the result, and put it at 50 then no one is happy. Rankings are merely a list, not a bible! They are something to be used as a reference point and to spark debate... nothing more.Linton described how the process has evolved over the years: there were only 5 people on the panel in the first year (hence a 20% weighting per person), versus 11 this year (a 9% weighting per person), which includes 'one' vote from a panel of 25 'ordinary' golfers. There have also been changes to how points are awarded.
But the difficulty with changing the process is that the rankings are going to change too. It's a balancing act and the magazine needs to establish a happy medium that delivers a consistent approach, year after year... of course, the danger there is that you end up with exactly the same ranking year after year, and who wants that! 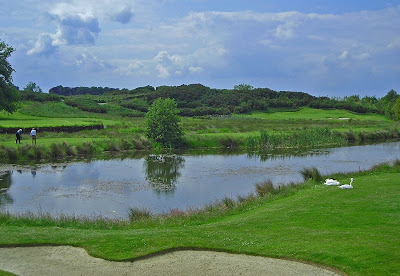 [Photo: Rathcore's par three gem, the 16th]
Greg certainly was taking issue with aspects of the ranking, namely the huge shift in the position of Old Head of Kinsale over the last three years (down 5 to No. 29 in 2009, down another 18 to No. 47 in 2010, yet up 23 to No. 24 in 2011). There are also 20 courses that have moved by 10 places or more, which is a significant shift no matter how you look at it.
When these two had finished, it was my turn. Des asked me about Hooked, which I wasn't really expecting.
It was a great plug - the audience is 100,000 strong - and I ended up reminiscing about freezing nights in a camper van and playing beautiful Portumna surrounded by deer. I got to say a good bit about Scrabo - a course that has never been near the top 100, but is one of my favourite experiences of all time - and also Rathcore - a course that was No. 65 a few years back and is now, oddly, nowhere to be seen.
The truth is, I don't agree with the GDI rankings, but that is MY opinion. Greg and I would argue all day long over Portmarnock's position at No. 2, and I didn't much fancy the way he was reaching for his 7 iron when I suggested it wouldn't even make my top ten... but that's what rankings are about: opinions. 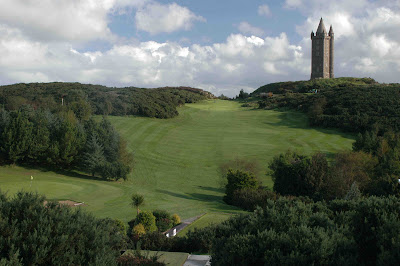 [Photo: Scrabo's brilliant opening par 4 hole]
It was a 20 minute discussion, and if you’re interested in listening to it, get yourself onto http://www.rte.ie/player/# and click on ‘Radio’ in the top menu bar. That should bring up a new page, where you click the RTE Radio 1 circle, and then type in Saturday Sport in the ‘Search’ bar, which brings up all the recent shows. Still with me? Click play for the 26/11/11 entry and then go all the way forward to the 02:55:30 time mark. Hard work, I know, but who said life was easy.If for nothing else it is interesting to hear Linton describe the process… and you should have seen the size of the folder he had with him, containing all the course assessments. The man came prepared.

Posted by Kevin Markham at 4:45 PM