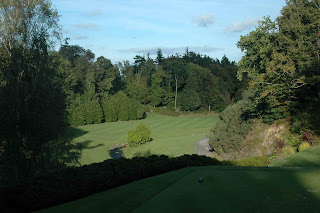 [Photo: Druid's Glen and the famous 13th. Finding the fairway is a beautiful thing... cutting the corner and finding the fairway is even better]
I won't deny that it's an interesting combination of holes that has no room for Royal Portrush's famous par three 14th (Calamity) or Druid's Glen magnificent and terrifying par four 13th, but I was creating a par of 72, in the correct order, with four par threes and fives, and a good mix of parkland and landscape. Oh, and only one hole from any course, otherwise some courses would have two or three holes on the list - like Tralee, Adare, Druid's, Ballybunion, Narin & Portnoo. 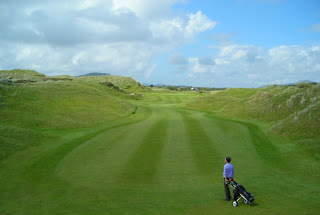 [Photo: Waterville's par five 11th - one of the only places on the course where you're protected from the wind]
It proved a remarkably difficult task. I had to add and then swap holes around to get what I wanted. As a result there are a few 'weak' holes - the par five 13th at Naas most obviously. That's not to say it's a weak hole, but there are several par fives out there that would be better: the 4th at Concra Wood, the 18th at Adare, the 16th at the K Club, the 11th (Tranquility) at Waterville, the 16th at Lough Erne... but it was all about getting the right fit, and that's what I did. 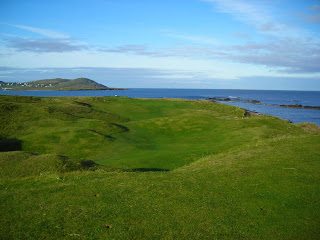 [Photo: Narin & Portnoo's 9th hole. You don't get closer to the ocean anywhere in Ireland]
Over the next weeks I'll be blogging about each 'best hole', why I picked it and what other holes were in the running.
The best 1st hole is in Northern Ireland, and it's not the famous opener at Portstewart.
Posted by Kevin Markham at 3:26 PM