Did anyone see the piece about the K Club in The Irish Times last Saturday? In 2009 the club (owned by Bishopscourt Investments) made revenues of €14 million and yet managed to make an operating loss of €4.6 million. Impressive, no? Add in interest charges of €1.9 million and you’re looking at a €6.5 million loss. And, according to the article (and the group’s latest accounts), 2010 saw continuing losses.

Now, everyone’s favourite ‘management’ agency is mightily involved – NAMA took over the Bishopscourt Investments’ €55 million bank loan last year – so you know there’s trouble brewing. The question is: are we at risk of losing our esteemed “K Club, home to the 2006 Ryder Cup” (as the golf club now seems to be known)? 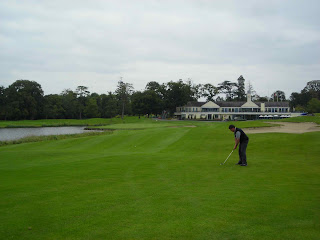 I don’t know the answer but, from what I’ve read, Mr Smurfit seems very keen on buying out Gerry Gannon, so maybe he has plans… again! Somehow I doubt that the K Club will actually fail, so it’s a question of what they do to overcome the problems they’re currently experiencing. 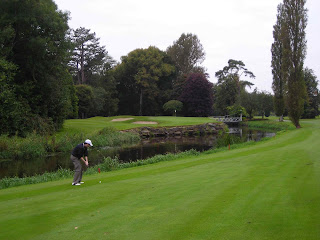 [Photo: approach to the 16th green. over the River Liffey]

I like the K Club Palmer course – it’s one of my favourite parklands – but golfers won’t visit it for two reasons:

The green fees are way too high: http://www.kclub.ie/golf-rates-2011

You’re charging rates that are amongst the highest in Ireland, and these compare with Old Head, and exceed even the priciest links courses… where green fees are aimed at American visitors specifically. These visitors are prepared to pay for something special and unavailable in the US, but the K Club is not special to US golfers, even with the Ryder Cup pedigree. Irish golfers, meanwhile, simply won’t contemplate €200 green fees, which leaves corporate outings and societies – the former are drying up while the latter may still view the society prices as being too steep (€65 until the end of March, and then rising fast).

Even the ‘special offers’ are seen as expensive, and often require you to spend the night at the hotel – although the current ‘March Madness’ offer of €125pps is excellent value - http://www.kclub.ie/Default.aspx?treeid=139&oid=13764 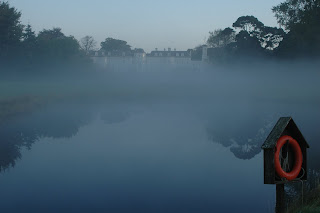 [Photo: view of the 5 star hotel from the 1st, on the Smurfit course]

The hotel is amazing (I’ve spent a night) but special 'golf' offers that require you to stay the night do force your hand somewhat.

The superior attitude that the club used to exude has been tempered somewhat by recent times, but it still exists. Honestly, the K Club is the only club that gives off that ‘your money isn’t good here’ feeling. There’s a recession on folks! Golf clubs are failing, green fees are tumbling and you still think charging the highest green fees is important to be seen as the ‘premier club in Ireland’. 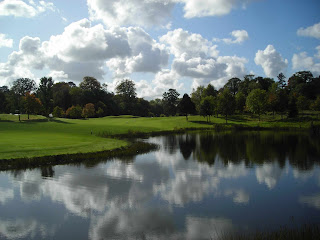 It’s time to go on a charm offensive. Bring down your fees, promote your sunrise and twilight rates, and open up the club with good grace and a smile. You want people to start talking about you in positive terms instead of all that negativity that fills the air every time the K Club is mentioned in conversation.

The truth is, you made revenue of €14 million, so perhaps your income isn’t the problem. But if that’s the case, it’s time to plug that very large hole that’s leaking money like a sieve. And for that I have no suggestions. But talk to my dad – he’s an accountant. 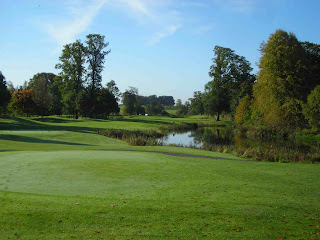 [Photo: the lethal 7th, Index 1, where Stevie dropped Tiger's club in the water]

You probably think I’m having a right go at the K Club. And I am, but only because I want the Palmer course to survive for the right reasons. It’s a thrilling course with possibly the best set of par fives in the country. The Smurfit course? If you told me tomorrow it had been bulldozed I would not shed a tear.

Posted by Kevin Markham at 2:28 PM