“It was very civilised,” said Donal. “It wasn’t really a stag party. Just a few pints in Woodenbridge.”

There were four of us standing on the 1st tee at Mount Wolseley, for the Top Golfer Junior Scratch Cup, and as we introduced ourselves it was evident that Donal was looking a bit rough.

“Then the sambuca and tequila started arriving.” The memories were clearly painful ones as the groom-to-be snap-hooked his opening drive towards the bunker. 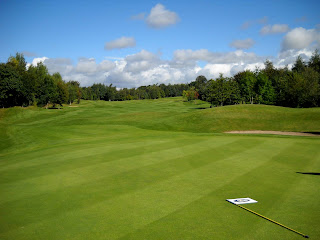 [Photo: view back down the par five 7th]

My memories of Mount Wolseley were not positive. It is over-shaped and long, with elaborate green complexes and a multitude of bunkers around and under each one. Four years ago, many of the young trees had yet to make an impact so it felt open and somewhat undefined. My playing partners, part of a society, struggled with the length, even from the front yellow tees.

I was looking forward to this return visit – a chance for a re-evaluation and the enjoyment of a competitive environment.

The fourball (it seemed odd to be sending out fourballs in strokeplay) was completed by Martin and Pat, who had travelled down from Roscrea Golf Club (an hour and ten minutes, not exceeding the speed limit, according to Pat). 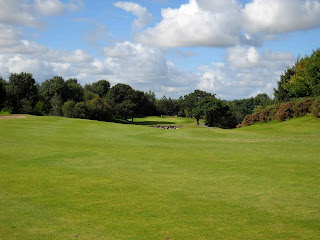 [Photo: the approach, over a big pond, to the par five 10th]

To say that the day was blistering is an understatement. The sun was out and burning. The course looked superb and it was the kind of weather golfers dream about. If ever I was going to love Mount Wolseley then today was the day.

To help us on our way, the fourball in front of us walked off the 1st green and were never seen again, and the fourball behind were rarely seen either.

The golf blew hot and cold for all of us, but it was Donal I felt most sorry for. All the alcohol seeping from his pores attracted the ardent attention of two wasps who took eight holes to leave Donal in peace. He wasn’t stung, but the constant buzzing around his head distracted his putting. Even so, for a 5 handicapper with a hangover and an insect entourage, walking off the 9th at four over was not bad going.

Pat and I had a debate about Ryder Cup picks, as all golfers seem inclined to do at this time of (every second) year. I, for one, do not see Harrington getting into the side ahead of Rose or Casey. Rose established a strong partnership with Poulter two years ago, and Casey would go well with Westwood, especially as Garcia is not in the frame.

Does Harrington get that third captain’s pick? Ahead of Molinari? And what about Bernard Langer to partner fellow German, Martin Kaymer? The one thing you can be sure of is that Monty will go his own way and will pick the team he wants, not what he thinks people want.

Pat thought Harrington was a definite, but Harrington’s record is not the best – played 21, won 7, lost 11, halved 3 – and his form this year has been erratic. 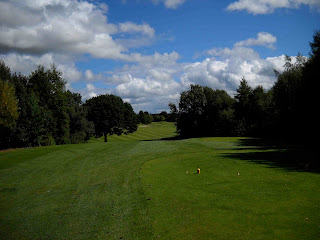 [Photo: The par four 14th - a short par four with the green just visible behind the middle trees]

Back to Mount Wolseley [Full set of photographs here]. Donal on several occasions commented on how good looking the holes were and how there wasn’t one weak hole on the course. But my thoughts on it being over-elaborate remain: too much mounding and not enough natural flow; a few too many doglegs and bunkers. But the course has definitely grown on me. The trees make a much bigger impact and add colour, the greens invite aggressive shot making, and their big slopes are intimidating. It is a tough track.

Mount Wolseley has matured well and I can only assume that it will continue to improve. It is part of a large hotel in Tullow, Co. Carlow, and the car park was packed – a good sign in the current climate. I look forward to going back next year. 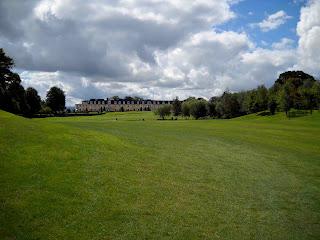 [Photo: The par four 18th, a sharp dogleg right, around water. The hotel is behind]