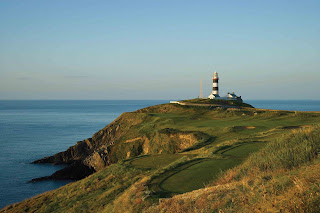 In terms of its location, there is no better golf club to drive to than the Old Head of Kinsale. It feels like you’re driving out to the tip of the world. I’ve already mentioned Hole 2, but the 4th is probably the most mesmerising (12 comes a close 2nd) because of its aspect, the dogleg that curls across the clifftop and the lighthouse behind the green. The tee box sits on the cliff top, 300 feet up, and a golfing buddy of mine who has vertigo had an unsettling time when he played there. If you have a caddie, chances are he’ll be telling you about the wreckage of the Lusitania as you leave the tee.

[Photo: green to tee at Mitchelstown] 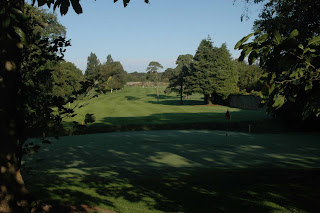 There are three other holes that stand out, and Mitchelstown’s par four particularly caught my eye. There are two things about it: the three or four pine trees on the left of the fairway, by the old wall, that mark the kink in the fairway – it waggles like a shake of the hips – and, secondly, the green location, under tall trees and over a deceptively broad river. 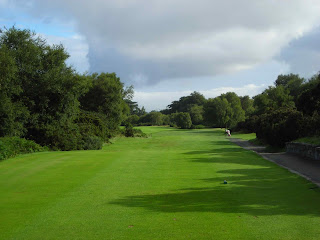 Clandeboye’s (Dufferin) 4th is Index 1. It is a tight and tricky dogleg that requires guile (aka a three iron) off the tee, and a brave approach to another attractively located green (old wall behind, trees all around). 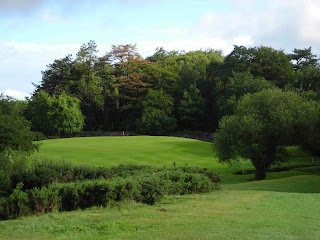 Macreddin’s 4th is a par three. It is unrivalled in Ireland for distance, and by that I mean in terms of the drop from the tee to the green. It is far, far below you and watching the ball fly high and then drop, endlessly, past fields and farms and sheep to the green below is a thrilling sight.