Here’s a little piece of customer service that golf clubs might like to take on board: get some mobile phone rechargers. It shouldn’t cost them a cent as you get a free charger every time you buy a phone, which means the average household has 23 chargers shut away in drawers and boxes. Ask your members if they have a spare one they don’t need, and then keep the rechargers from the different manufacturers in a box, ready to say to a member or visitor with a dead phone – “here, we’ll plug that in and recharge it for you, and you can come and get it in 20 minutes/after your round.” 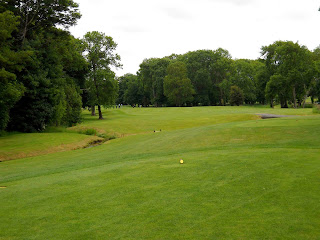 [Photo: the par four 3rd at Adare]
[No doubt someone will quibble that there is no place for mobile phones in a golf club – but if you think you can stop their use, I have two words for you: King Cnut.]
When we arrived at Adare for our second round of the trip, the first request made in the pro shop was for a mobile phone recharger. One was produced immediately. Nice touch – keep the customer happy. Rod and I were delighted – yer man, Ronan, had been using our phones since the previous day.
Adare was preparing for the JP McManus Pro-Am (5 & 6 July) and a huge marquee was being erected near the clubhouse. The place looked superb and as there was no surly security guard this time, I started in much better spirits than my last visit (rain, puncture, obstructive guard). A great breakfast (highly recommended) and a leisurely wander around the pro shop were just what we needed, and the young lad in the shop told me that 12 of the world’s top 15 players were playing in the event (no Mickelson, Kim or Stricker). The confirmation, three days before, that Tiger was playing had boosted interest hugely, so I wasn’t that surprised to hear they had a full time sheet. 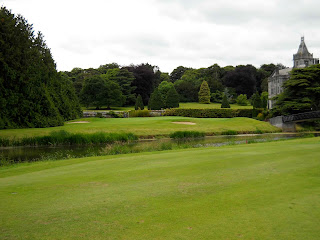 [Photo: the approach to 18th green, over the River Maigue, with a glimpse of the hotel]
Adare is one of those grand venues, with a long drive up to an elegant clubhouse (not to mention the 19th century hotel and former residence of the Earl of Dunraven), excellent facilities and a relaxed air that matches Mount Juliet. It puts you in a great mood. I’d also wanted to play Adare rather than another links course so that we could savour the differences between a top links and the best parkland in the country. It started well, too, as three drives found the fairway, but after that balls ended up in the water a bit too often.
We played skins, 20c a skin, and I had eight skins after eight. After that, nothing could ruin my day. Ronan, as is his way, had a late surge that pulled in two birdies and a back 9 of two over. The second birdie came on the famous 18th where he was able to have a go for the green in two, over the River Maigue. 511 yards with all carry to the green makes for two fine blows. Rod’s golf was up and down, literally, as he dug his way out of the rough and bunkers to make several elegant pars. 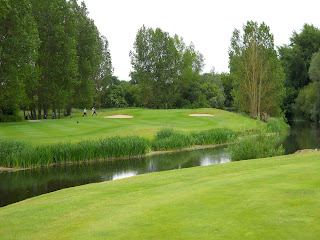 In ‘Hooked’ I made two observations about Adare that I should revisit. The first comment was that the bunkers are too firm. When I read my review before this trip I thought I had made a harsh judgement, but the bunkers are hard. There is a fine layer of soft sand on top and then firmness underneath that can bounce the club. On this visit there was no rain to soak the soft sand and playing out of the bunkers was a pleasure – you get more check. This is the way Adare likes its bunkers, evidently, and that’s fine with me.
My second comment was that Adare was tough. If you play badly, almost any course is tough, but I remember Adare having much tighter fairways and trees that squeeze you a lot more (at the start and on the back 9). This time I was playing some of the best golf I’ve ever played and realised that sensible placing of the ball makes all the difference – yes, I know, that’s true of any course, but with trees and water crowding your line it’s not as obvious at Adare, where you are tempted to force it. 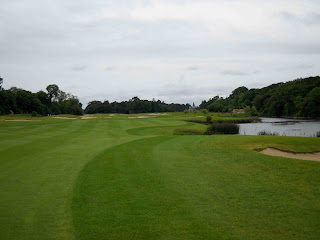 [Photo: the looping par five 7th, with water threatening on all shots]
It is big and spacious; the design and routing flow easily and, apart from one open stretch (holes 5 to 8), there is a denseness that makes the holes solitary and beautiful.
Up for debate
There is a considerable debate about the best parkland in Ireland. K Club, Mount Juliet and Adare are usually mentioned, alongside Druid’s Glen, Fota Island and Slieve Russell. Then there are the new pretenders: Concra Wood, Killeen Castle and Lough Erne. The oldest of them all is Carlow, so there is plenty of choice. I put three courses at the top of my list: Mount Juliet for hospitality, Druid’s Glen for dynamism, and Adare for scale and beauty. I suspect that Concra Wood and Lough Erne will be challenging that top three very soon, but for now I’m content to say that I played the best parkland in Ireland last week, and one of my top three favourite links (Ballybunion). 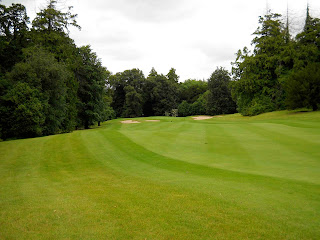 [Photo: downhill approach to the dogleg, par four 13th]
Not bad going when you consider that Ballybunion was free (a fourball voucher), Adare was 50 euro a head (thanks to the lovely Orla), the accommodation was free and Ronan refused to accept any petrol money – so just food, drink and crisps (not strictly a ‘food’ group). And poker money of course.
The only negative is the size of the changing rooms, which are too cramped and dark after the expansiveness you get to enjoy everywhere else. But seriously, after a course this good, who cares!
Posted by Kevin Markham at 3:02 PM