There are some clubs that generate a lot of heated debate: anyone care to say ‘K Club’! The Old Head of Kinsale is another and, further afield, there are the Celtic Manor and Gleneagles courses that will host the Ryder Cup. By all accounts they are bland. 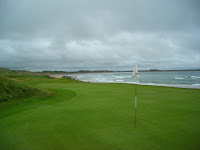 They have one thing in common: they’re parkland.

[Photo: The par three 9th green, with clubhouse in the distance]

The only links I can think of that generates such a similar amount of consternation is Doonbeg. Yes, yes, I know Royal County Down gets its fair share of criticism for its blindshots, but the roots of Doonbeg’s problems are its age and its “resort-ness”. And Greg Norman may get some stick for his design - why, I don't know.

So this month’s award of European Golf Resort of the Year for its “exceptional contribution to the world of golf travel” will not necessarily pacify its critics. The award is made by the International Association of Golf Tour Operators (IAGTO), which represents 49 countries, so it’s not something to be sniffed at. And the facilities, clubhouse and Lodges (available to rent) are superb. It has proved to be a major attraction for non-golfers, so they're doing something right.

A couple of fanatical Canadian golfers were over recently and they played at Doonbeg, Tralee and Lahinch. I asked them where they ranked Doonbeg because I had recommended it to them.

“OK,” was their answer, but not, apparently, in the same class as the other two. I agree with the latter statement, because Doonbeg is in a different class, because it's different. 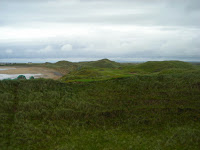 Doonbeg is something new, it’s full of surprises and it has big, sharp greens. Lahinch on the other hand has the history and the classic links quality that make it a must-visit course.

Many people worship at the altar of Lahinch, but if I had to choose between these two courses, to play one round, I’d choose Doonbeg. History and reputation are important, especially if you haven't played a course before, but Doonbeg offers more excitement.

Posted by Kevin Markham at 5:00 PM