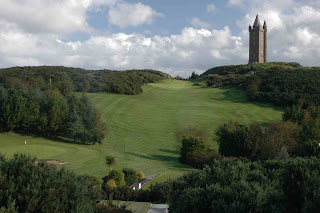 A few weeks back I was chuffed to receive an email from my publishers, which they had forwarded from an organisation called the Washington Ireland Program (www.wiprogram.org). I was being invited to play at their inaugural Irish event, based on a glowing review I had given Scrabo in a Belfast Telegraph article.

Now I will interrupt this broadcast to say a few words about the course, mostly because wherever I have gone and extolled the virtues of Scrabo, I have been laughed at. Scrabo is a hilltop, heathland type course drenched in gorse. It is hard work physically and mentally, and high handicappers will struggle. The most punishing aspect is that good shots are not always rewarded, and vice-versa. And with so much gorse, balls will rarely be seen again. But here’s the thing: Scrabo is a mighty adventure. It promises spectacular views, it has some amazing holes – including the best opening hole in Ireland – and it will test every skill you have. I confess that when I went back for this second visit I was apprehensive – apprehensive that I wouldn’t like it nearly as much, that I would find faults, that I would agree with all the critics I had met at other clubs. But I shouldn’t have worried, because it’s every bit as exciting as I remember. The one thing I did find was that there is a junction in the middle of the course where holes cross each other wildly: it is dangerous, and you won’t always know where you’re going, so it’s an important point for visitors. Some signs indicating direction and the dangers ahead would help.

So, after Concra Wood and Lough Erne (see next blog) I headed for Scrabo, where I met Nick Burke, the man who had invited me on the day. He, along with three others had organised the event which was bringing together Irish businesses who are involved in the WIP – it is a charitable organisation that takes applications from students all over Ireland and then sends the best ones to Washington DC, where they become interns in US government, media, business and non-profit organisations for eight weeks. Over a six-month period they also gain valuable leadership training to encourage them to continue and nurture the strong ties between our country and the US. Many of the programme’s 350 graduates are now emerging in important careers in politics, law, business and the community. Or, on this particular occasion, golf. Actually, that’s not strictly true: playing off 28, neither Nick or Jonathan – the WIP Ireland Director – would claim to be golfers. The fourth member of our team was Bob van Heuvelen, one of the programme’s key players in Washington and on his first trip to Ireland. Bob also chose a handicap of 28 – it was a pick ‘n’ mix kind of day – and it made me wonder why they chose golf as the event’s sport. On top of which, Scrabo 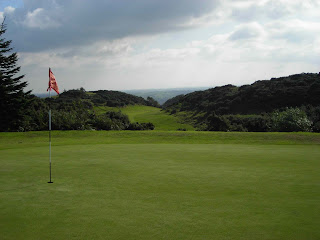 is a nightmare for the best golfers, so it must have been hell for these guys. I distinctly recall the 14th, where Bob and Jonathan lost two balls each, I lost one, and Nick looked mightily pleased with himself having found the fairway on his first attempt. All in all, between us, I’d say we lost over 20 balls. Nick lost one with his first shot, slicing a drive high and arcing it towards my camper van. I tried not to take it personally.

[Photo: views down the 3rd from the 2nd green]

Then again, the golf was only a small part of the day so a hard and sharp hailstorm didn’t dent anyone’s enthusiasm. Dinner afterwards was a carvery, in a large function room that serves as the restaurant and also a wedding venue. When I was here last year (Sept 07), the clubhouse was still being finished, but Ivan, my host for the evening, was saying how the club hoped it would be popular for weddings. Personally, I’d say it’s a perfect venue, with incredible views from the balcony and that overall top-of-the-world feel. Scrabo Tower is just the icing on the cake.

I sat with Bob and Brian – Nick’s dad – and an assortment of other folk who came and went. There was Tony, who’d just got married for the first time in his 60s, Robert who is built like a tank – the kind of man if you bumped into him you’d bounce off and he wouldn’t notice a thing – he and Bob discussed marathons, seeing as Bob had run one and I lost count of the number 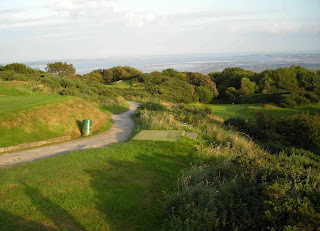 Robert had done. There was Tom Hamilton, a local councillor with stories of meeting Mary McAleese, Roger who went round Scrabo with 43 points and won the event – 43 points will do that on most days but it is a truly spectacular score at Scrabo.

[Photo: the pretty par three 17th with views over Strangford Lough beyond]

The most entertaining conversations were around Bob’s stay in Ireland: first, Tony suggested he go to Dublin for the day, then Robert insisted he go and see a football match – to which Bob joked that we don’t play real football in this country. Skipping quickly over the wimp’s version of football (aka soccer), Robert pointed out that in GAA football the players don’t wear pads or helmets, and play for the full duration of the game, non-stop. ‘What!” exclaimed Bob, “No downs?” And then we completely bamboozled him because there’s no quarterback. Bob was perplexed and as I’m an American Football fan it was amusing to see GAA from an American’s perspective. History doesn’t relate whether he went to a game or not, but I would like to thank Bob for restoring my faith in Americans. For eight years I have refused to go to America (my sister lives there) but with Obama looking like the next president, I shall be going back next year – provided there are any banks or airlines in existence.

It was one of those entertaining evenings that flies by. When it came time for the prize giving, raffle and auctions, I even got a mention by Roger (different Roger) who is a member at Scrabo. He said I had ranked Scrabo in my top ten – an interesting claim since I don’t even know what my top ten are yet. But it will be close. And I managed to leave a good enough impression that I’ve been invited to next year’s event, perhaps somewhere further south. Now, if they asked me to play in Washington…

Be sure to check out www.wiprogram.org

Posted by Kevin Markham at 9:30 PM