Hats off to Concra Wood 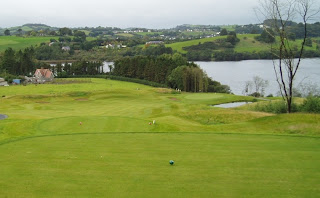 “Enough of this rubbish,” barked John, one of my playing partners, and Editor of the Irish Mirror. Those weren’t his exact words but this is a family show, folks.

We were standing on Concra Wood’s daunting par five 15th, the wind and rain driving into us. The hole hits a long way over Lake Muckno and he’d just put his third consecutive drive in the water. He hadn’t lost a ball until the 12th, but between 15 and 18 he lost seven off the tee. The three free balls, courtesy of Concra Wood, had long since gone by the time we reached the 18th tee, and Marty handed him a decidedly dodgy ball after John put his first in the woods. Clearly, Marty knew what was coming next. He wasn’t wrong.

This was a different kind of day for me – it was Concra Wood’s PR day, when a bunch of people from the media turned up to assess the course. And the hospitality. Over the previous two weekends the course had hosted 800 golfers for their four open days, so the folks at Concra Wood were brimming with confidence – and rightly so. Sadly, it was only the weather that didn’t play ball. Rain drove into us from the high tee box on the 1st and, after a lull, it caught me unawares on 14, when a huge gust of wind whipped my waterproof hat across the tee box and 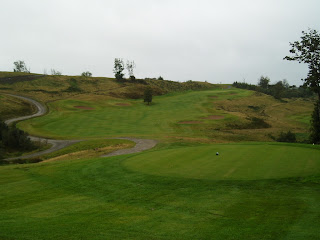 out into the lake.

Our fourball was made up of John and Marty, who sensibly took a buggy, while Shane Derby (see Clandeboye blog) and I walked. It’s a long track, and in the rain it is not pleasant. Shane carried his clubs and I dread to think how uncomfortable that must have been.

This is the new home of Castleblayney Golf Club, although the 9 hole course behind Hope Castle is still open for play. One thing’s for sure, it is a big change-up. In motoring terms, it would be like shifting from second gear straight into fifth, or perhaps a Ford to a BMW would be more appropriate. This amazing lakeside location belonged to Coillte and was sold back in the 1990s. 240 acres were sold for what we would now consider an absolute steal. And when you experience the golf course that flows across the wonderfully rugged landscape you’ll see what an absolute steal it was. I’m sure that the golf club didn’t see it that way at the start – Mick whispered that their bank balance was an impressive £1,000 at the time!

The course tumbles down to the lake’s edge, from a high point that will soon be home to the clubhouse - at the moment it’s a prefab - and will offer almost 360 degree views. And what views they’ll be. This is a spectacular location for a golf course and I and my playing partners were hugely impressed, hole after hole. The surrounding landscape gives that rolling rhythm that you’ll find repeated on the course. I will have a little dig and say that some of the mounding and rolling fairways/channels seem a little too much – it’s not something I’ll put in my review because it’s just too early in the course’s evolution, and nobody else seemed to notice it. Suzanne Coyne, who sat next to me at the dinner in Hope Castle, and is the driving force behind Golf Ireland (the magazine and TV station), thought the course was superb – and this was the general feeling all round. 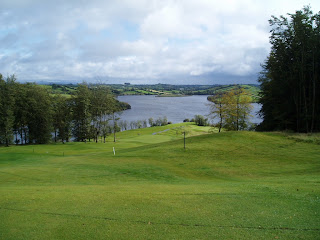 Actually, the dinner was an education. Here were people who analysed courses in completely different ways to me – Suzanne talked about the quadrants on the green, which sailed far above my head. These are not things I am looking for and, I hope, this is not what your average golfer is looking for either. If they’re like me they want to know if they are going to have a blast or a whimper. Concra Wood is definitely the former with challenges, thrilling shots and greens that are perfection. Stand at the top of the drop on 10 and tell me your approach is not the highlight of the day. The hole drops like a stone to the green. See photo.

It was a great pampering and Karen McCaffrey, the Sales & Marketing Manager, and Mick Fee, Project Manager, did a great job organising the day and hats off to them. Dinner was at Hope Castle, a hotel that could do with an injection of TLC, but the food was great and the conversation enlightening. Adrian, one of the directors, was asking me all about my travels. And, not for the first time that day I was being 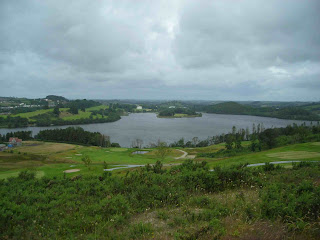 asked what I thought of the course. Coincidentally, whenever I was asked this question, Mick was hovering on the fringes. As I prepared to answer Adrian’s question, Mick leaned in and pointed a finger in my direction. “I’ll be watching you,” he said with a wide smile. No pressure then.

[Photo: from Concra Wood's highest point, down over the 3rd green and Lake Muckno to Hope Castle]

The following day was beautiful and it showed the lake in all its beauty. From Hope Castle you can see the golf course across the water and it looks steep – in reality it’s not, at least not continuously, and the shape and routing of the course has been done brilliantly to minimise the effort required. Mick arrived in his wheezing four wheel drive and he took me for a spin around the castle and the existing 9 hole course. He also took me down to Black Island which sits in the lake off the castle grounds, and gave me a brief history lesson along the way. This is a beautiful spot and several people were out walking dogs – there are marked routes around the island which is reached by a bridge. But back in 1947, the year of the Big Snow, there was no bridge so the only way to reach it was by water. Or ice. In 1947, the ice was so thick the locals were able to take horses across, fell trees and have the horses drag the wood back.

I have no doubt that Concra Wood will be a serious attraction in the years to come and it will be regarded as one of Ireland’s best inland courses. It has everything a golfer could want and it is a thrilling round of golf – so put it on your list for next year.

Posted by Kevin Markham at 7:36 AM