January comes to an end but the month saw two Irish golf course rankings published. Oh sure, golf rankings cause people to argue or even sneer but they also entice people to visit courses they might not otherwise have played.
By all means debate whether Grange is better than Castle, better than Hermitage. Is Ballybunion better than Lahinch? Which is the best parkland in Northern Ireland, or Cork for that matter?

Rankings will spell that out in black and white and whether you agree with them or not they’re a starting point for a conversation… and, in the end, it’s a consensus of experts so it has some standing that deserves a look…
… so take a look
Destination Golf Top 150
Destination Golf's 150 best Irish courses are ranked in three categories: Platinum for the top tier, then Gold, then Silver. Lots of photographs and lots of descriptions (written by me) of the courses.
Click here for the magazine 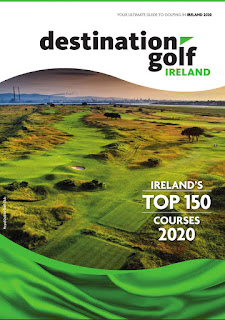 Irish Golfer Top 100
This changes every year thanks to changing personnel on the judging panel and follows a set of ranking criteria that put design to the fore. I am part of this panel and it is an exhausting process to rank 100 courses, decide which don’t make the cut this year (this is seriously difficult), and who out of Castle, Grange, Hermitage… and all the rest… get the bragging rights this time around. A lot of courses are doing work and thins influences things considerably. Take Ardglass, Dundalk, and Dingle – all three making changes that will alter things considerably on their courses.
Click here for the ranking

Posted by Kevin Markham at 4:47 PM