Top and Tail - the perfect end/start to the year

Sometimes you just get lucky I guess.
On December 31st, four of us rolled up to Druids Glen. The sun was out, trying to ward
off a chilly breeze, but the weather was as good as you could ask for. And so was the course. I know Adare is re-opening in a few months but Druids Glen is still Ireland’s most colourful and vibrant parkland… in my opinion. The variety and test is fabulous and you won’t find a better set of par threes anywhere. Unfortunately we didn’t make it to the last of these – the notorious 17th – as the rain came in playing the 12th and we decided enough was enough after 14 holes. Even so, what better way to build up to New Year’s Eve!

Last weekend I travelled to Carne (via Westport) to meet golf course architect Ally McIntosh, the man who created Carne’s third ‘Kilmore’ nine. The Kilmore was closed last year due to financial constraints at the club but the hope is to re-open it this coming season. A new head greenkeeper, Chris Breen, started on January 8th and Ally, Chris and I went on a tour of the Kilmore nine on Sunday afternoon, with Ally and Chris talking technical stuff that was way over my head. I hid behind my camera instead.
Considering that the course had been closed for several months the condition was a lot better than I expected. Earlier, Ally and I had mused about playing the holes… but we ended up playing the original back nine instead.

Signs are positive that this astounding addition to my favourite Irish golf course will be open for play in the near future. It’s an unforgettable experience.

The plan had been to play the Hackett course in the morning but frost put an end to that. The course was closed until 11.30. That’s not something you’ll often see on a links but it did give me the opportunity to go out with the camera and catch the early morning light and some wonderfully frosty scenes.
When we did get out on the course it was bright and cold and beautiful. The sound of Ally’s ball bouncing on the par five 10th green was fair warning that this was a different game entirely. I’d already reached the green with a three and five iron – with the 5 iron easily travelling 250 yards over the frozen surface – so putting or using bump-and-run from 50/60 yards was the smart play.
The day barely warmed up and after being on the course at sunrise in -1C temperatures, I left at 4.30 in 1C. I’d never been to Carne at this time of year and the course, for all its frosty coating, looked magnificent. And the condition is excellent, too.
OK, I’d suggest waiting till the really cold spell is over but if you travel up before April you can play the course as many times as you like for €100. It's a special winter deal. Or, if you stay in the Broadhaven Bay, on the outskirts of Belmullet, you can get a really good play and stay package. Check the flyer below. 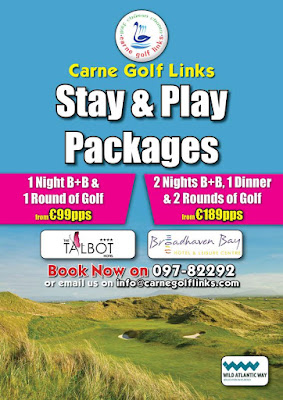 The hotel is five minutes from the course. It's a fabulous deal.

Posted by Kevin Markham at 5:05 PM