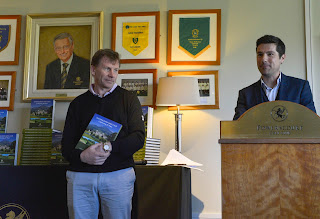 There are lots of Irish golf clubs celebrating anniversaries this year… six are seeing in their 125th… but the age matters little to the clubs who have cause to celebrate. Ten years, 20, 25, 50… these are all opportunities to revel in a little bit of history.


This was on full display at Powerscourt a couple of weeks ago when the club launched a very impressive hardback book celebrating 20 years.  The book is not inconsequential in size, stretching to 248 pages, with hundreds of photos and contributions from many involved in the club’s evolution. It is a comprehensive piece of work. The launch, hosted by new member Craig Doyle, took place in the clubhouse with dozens present, including the Slazenger family. Indeed, the book is dedicated to Dr Michael Slazenger, the man who started the club on the grounds of the Powerscourt Estate. As speeches were made the sun lit up the two courses outside the windows, showing off the autumn colours and where the trees felled by Ophelia had long since been cleared away. This is a strong club with both courses embraced by ancient trees. Ophelia managed to snatch just five and will merit only a mere mention in a future chapter as the club looks forward to its next 20 years.

This is a major piece of work involving dozens of people and contributions from every sector, every age, every aspect of both the golf club and the estate itself. One of the members, Colman O’Neill, a stalwart from the earliest days, has amassed some 3,000 images of the club and roughly 70% of the images in the book are his. 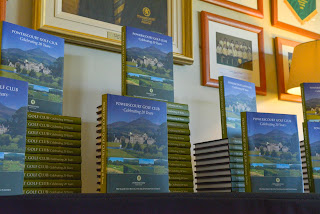 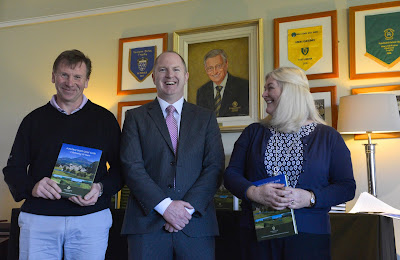 Charlesland celebrated their anniversary with a series of golf events… but, more telling, the year also saw the completion of a €1 million investment in the course which saw a short game academy introduced and two new holes.
No clubs are celebrating a centenary in 2017, while the 9-hole Dunmore, in Clonakilty, is the lone club with 50 years to its name.

Congratulations to all at Powerscourt Golf Club and on the publication of 'Celebrating 20 Years'.

Posted by Kevin Markham at 7:29 PM