On Sunday, 30th July, top Senior and Junior golfers battled it out in testing conditions on the superb Galway Bay championship golf course. The Senior Scratch Cup was played over 36 holes and, after Round 1, local favourite Eddie McCormack and Galway’s Joe Lyons couldn’t be separated with an opening round of 70.

“The Course is in Fantastic Condition, both the greens and the fairways were perfect. Galway Bay is a true championship test off the Blue Tees. It was exceptionally challenging but I could find no fault with the course and the club, and it will be a perfect host for the Connacht Finals. It was also an added bonus to get one over on Eddie for a change. It doesn’t happen very often, but when it does it’s nice!”

In the Junior Scratch Cup played over 18 holes, Portumna’s Eamon Dervan secured the Cup with a 76, followed by John Bodkin with a 77 and local Marcus Brennan in 3rd with a 77.

The course is in great condition and was a good practice opportunity for the county’s top golfers to test themselves at Galway Bay before the Connacht Finals, which will be held on the course mid-August. This week is Open Week (see below), which will no doubt see added traffic during Galway’s busiest week of the year. 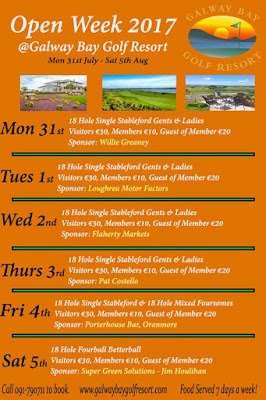 Posted by Kevin Markham at 9:22 PM