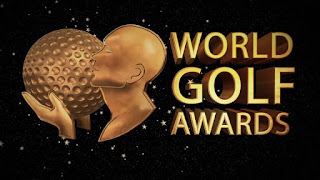 The World Golf Awards have just been held at the Conrad Resort, in the Algarve’s Quinta do Lago. It’s the 3rd year of the awards and the Conrad is becoming the host venue… which is not much of a hardship since it’s wall-to-wall five star luxury. (I’ve been lucky enough to sample it.)

In all, there are dozens of awards spread across the different continents and Ireland
gets its stab of glory, too, with four awards being made.

Doonbeg wins two: one for Ireland’s Best Golf Course and one for Ireland’s Best Golf Hotel. The hotel I can’t comment on but the golf course I can, and it seems rather odd that a course which received a massive makeover (by Martin Hawtree) and only opened again in the middle of this year would receive such an award. The revisions to the course are very impressive – that’s not my issue – but the greens are new and slow and are taking time to settle in, just as new greens should.  In my opinion a course which is not at its best should not receive such an award… in 2017, fine… but not 2016.


The other two awards went to Ireland’s Best Inbound Golf Tour Operator and Best Outbound Tour Operator. The former was won by Fairways and Fundays, the latter by GolfBreaks.ie

Fairways and Fundays, based in Naas, is barely three years old so this is a seriously impressive achievement for such a young company. What, you might ask, makes them special? The company focuses exclusively on designing bespoke itineraries for golfers AND non-golfers visiting Ireland. What better way to ensure clients experience the best of Ireland, both on and off the golf course.

“Winning this prestigious award is a reflection of the incredible work performed by our experienced and passionate team since we began providing the ‘Ultimate Golf and Ireland Experience’ to clients in 2014,” said Phil O’Carroll, Fairways and FunDays director. “Our company is the youngest ever winner of this award which reflects the high quality and unique product we offer.”