When was the last time you entered a prize draw for anything… and won? A car, a holiday, a cuddly toy… I once won a tee shirt when I was 14, and then a Sega Megadrive thing some 25 years later. My guess is that I’ve done better than 95% of the population when it comes to winning ‘free’ stuff.

Do you ever wonder if the whole
thing’s rigged? I’m not going to go all ‘Donald Trump’ on you… but when it comes to a prize as big as a car (or the US Presidency) we may believe that someone, somewhere is pulling the strings.


If Daniel Payne, a 24 handicapper from Dorset, once believed that he isn’t now! Daniel has won Golf for Life, thanks to GolfNow.com and Teeofftimes.co.uk, who were offering this remarkable prize to both Ireland and UK golfers. 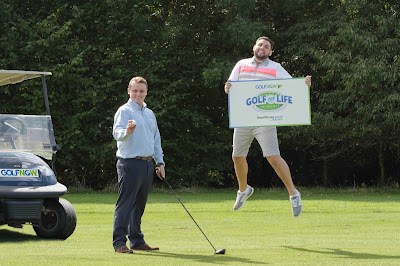 There could be only one winner and his prize is a free fourball every month for the next 30 years – to be played on a choice of more than 1,200 courses across the British Isles, all featured on the GolfNow/Teeofftimes.co.uk websites

Brian Smith, Vice President of International Sales for GolfNow, said:  “I would like to congratulate Daniel on his win and I hope he enjoys playing a wide range of courses throughout the UK and Ireland.  We knew that our competition would be popular but even we didn’t anticipate the vast number of entries that we received. It just goes to show that golf is becoming ever more popular as a sport and pastime.  Last year we supported 22.5 million rounds of golf booked in the UK and Ireland which equates to almost one every second.”

So the next time you see a competition/prize draw with loads of golfing goodies, stick your name in the hat and maybe you'll end up like Dan.

GolfNow, which is owned by the Golf Channel, is the world’s biggest provider of online golf booking technology.  Founded in 2001 with headquarters in Orlando, USA, GolfNow operates in more than 16 countries and provides tee-time access to more than 9,000 courses for more than 3.5 million registered users worldwide. Part of the BRS Golf group, the company has offices in Belfast and employs more than 70 staff in Northern Ireland. BRS Golf was founded in 2003 by local golf fanatics and IT experts Brian and Rory Smith, and was acquired by GolfNow in June 2013. This strategic alliance gave the local company global status, becoming a division of the Golf Channel television network and positioning it as one of the leading providers of golf technology in the world.

Posted by Kevin Markham at 2:33 PM