A couple of weeks ago I said I would let you know as soon as I heard about Golf Ireland’s 2016 ‘Dublin Golf Promotion’ event.

In what is a departure from previous years, when the event was held in Ballsbridge, in the evening, the 2016 event by Failte Ireland's 'Golf Ireland' arm has moved to the Crowne Plaza hotel in Santry. It will
be held on Saturday April 2nd, between 2pm and 5pm.

It is hoped that such changes will make it easier to attend, both in terms of accessibility and availability.
So, what is the event all about? It’s about some 40 Irish golf clubs and resorts promoting their courses, services and various golfing packages to golfers. Yes, it’s aimed at groups rather than individuals, but don’t assume you won’t get a little something extra if you have a four ball ready and willing to make a booking. This is all about Irish golf – selling it, supporting it and playing it. Golf clubs are working hard to provide great value packages so why not drop by and see what’s out there for the passionate golfer. Golfgraffix will also have their launch monitor there so you can knock out a few shots and see how well you do. 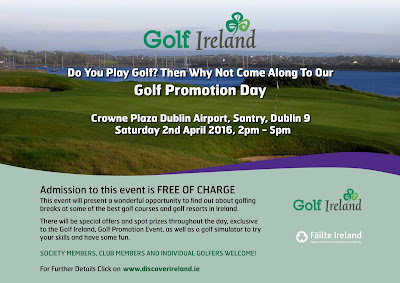 There will be numerous prizes given away on the day, too. Expect free four balls from many of the courses and maybe a free overnight stay or two at a hotel. Who knows… throw a business card in a bowl and you may win something else.
Some of the courses in attendance will be the classy Castlemartyr Resort in Cork, the Christy O’Connor designed Galway Bay Golf Resort, Portmarnock Hotel & Golf Links, the excellent Donegal Golf Club, the relatively unknown but idyllic West Waterford Golf Club and the Radisson Blu Farnham Estate Golf & Spa.

The hotel is on Northwood Avenue, Santry, Dublin 9. Pop it in your diary and drop by after your morning 18 holes.