My Night With Karl Morris

Many years ago, my mother decided that dad and I should attend a golf psychology seminar being held in UCD. Dad and I laughed. ‘We don’t need that’ we said in unison.

Clearly we were wrong. I have a – how shall I put this – fragile temperament and my dad, off 18, just loses his swing sometimes. Nowhere was this more obvious than in the Greystones GC Father & Son. This is a Scotch Foursomes event (both players drive and you then play alternate shots from the preferred drive) and has become extremely popular in the club. Most of the dads we play against are my age, which shows the strength of the junior game at Greystones... and juniors tend to have no fear.


In 2006, dad and I won five matches to reach the final. In the semi-final we came back from 2 down with 3 to play to win on the 18th. In the final we fell to pieces. Our opponents were playing almost as badly – we won the Index 3 6th with a triple bogey seven – but then dad got the shanks… and the fluffs… and the yips. We still made it as far as 17. Last summer, we reached the semi-final and I returned the favour, playing the worst golf possible. As early as the 11th hole I was thinking about how good it would feel to stop on the Arklow bypass and toss my clubs in the Avoca River. We lost on 13.

Our failure was not our inability to play golf – it was a failure to deal with pressure... and my masochistic streak of self-destruction that I pull around me like a cloak.

So when mum gave us a Christmas present of two tickets to a talk by Karl Morris, dad and I didn’t laugh. We admired her perseverance. 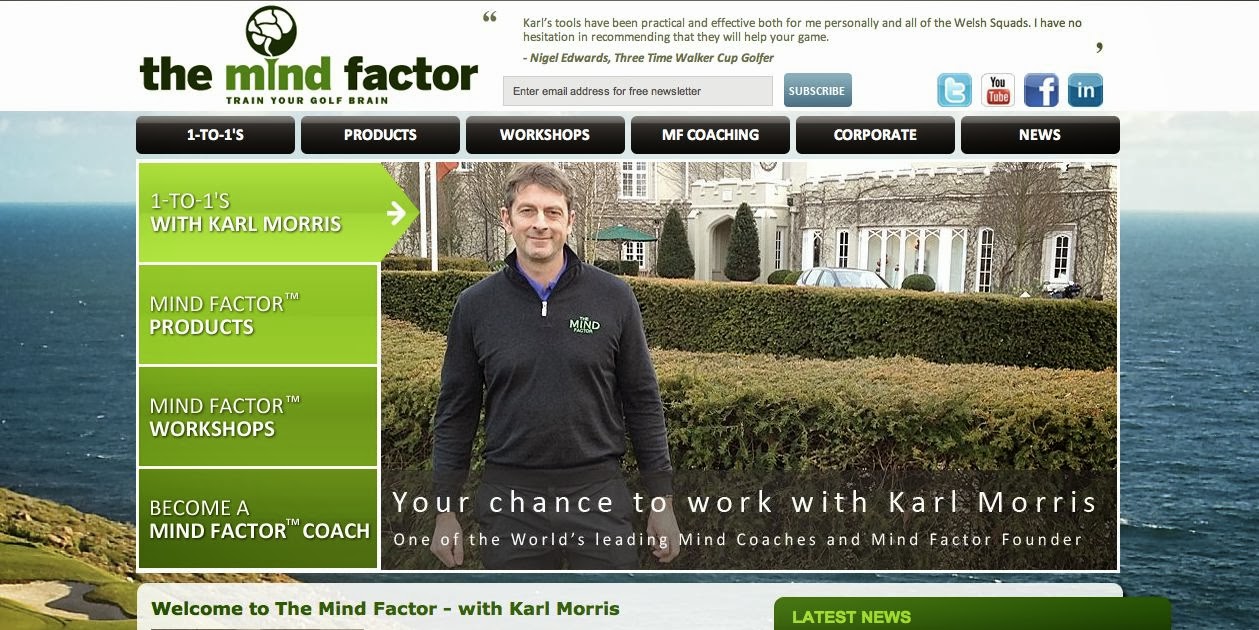 SAVE 5 SHOTS WITHOUT CHANGING YOUR SWING

Four nights ago we headed down to Greystones Golf Club for one of Karl’s Mind Factor Workshops. Organised by the Lady Captain, there were 200 people at the event – male and female, young and old. This had turned into a major occasion… and Karl Morris didn’t disappoint.

For an hour and a half he had us enthralled, telling stories, giving us advice and making us laugh. He pointed out the obvious failings of golfers and golf course management – so obvious in fact that we take them for granted and don’t even see them as failings anymore – and offered tricks, routines and mindsets to overcome them. Dad and I were hugely impressed and, along with everybody else, we took copious notes. Karl insisted on it.

I may not get over my all-consuming masochism but I have taken away valuable lessons, some of which should help me with those pathetic little tantrums. I’m not sure how much I can reveal here (re Karl’s copyright) but the idea of dividing a golf course into six lots of three holes, rather than two nines, will certainly change how I approach a poor start to a round. Why wait till the 10th to revitalise your round (by which stage I am usually struggling under the pressure of my own personal dark cloud) when you can start again on the 4th, 7th, 13th and 16th. It’s a routine; it’s a mindset; and it’s a way to discover when you play your best and worst golf.

Tickets for the event cost €20. I reckon I had recouped that within ten minutes.

Dad and I left at the end of the night convinced that we had the tools to help us win several times during the year. All we have to do is enter competitions when the other 198 golfers aren’t playing. I'll let you know how it goes.

For more information about Karl, visit his website at www.themindfactor.com. He writes regularly for golf magazines and works with several of the biggest names in Pro golf… you remember the red dot on Louis Oosthuizen’s glove when he won The Open Championship in 2010, don’t you! If you have the opportunity to go to one of his Workshops then don’t hesitate. And if you want a birthday/Christmas present then why not ask for one of his books, CDs or DVDs. You can even have a one-to-one.
Posted by Kevin Markham at 11:52 AM