What better testing ground to try out and review the PowaKaddy Twinline 3 three wheel trolley than Royal Porthcawl, on the beautiful south coast of Wales. There was only one problem: pulling the enormous box from the boot of the car in a busy car park, and unpacking it in full view was bound to attract attention. 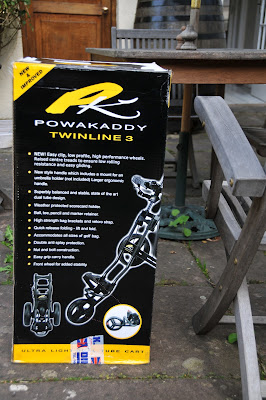 Sure enough, a shadow flickered across the tarmac as I ripped open the cardboard and sent plastic bags drifting on the breeze.

“What have you got there?” came from over my shoulder.

“A new trolley,” I said, running after one of the bags. I introduced the man to my latest acquisition, laying the wheels carefully on the ground and placing the main trolley body next to them. That was it… three pieces. This was going to be easy I thought.

Evidently the man, and his companions who had now arrived, thought otherwise and formed an arc around me. 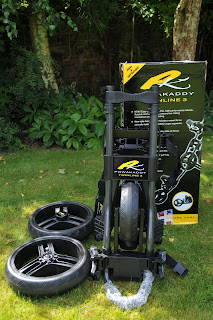 Mankind – and when I say mankind I mean ‘man’ – has a fraught relationship with instruction manuals. Somewhere, a writer works tirelessly to create the foolproof set of instructions… somewhere else a man ignores them completely and gets stuck in.

Man is smart, intuitive and hopelessly misguided, which explains why we hurl remote controls, bang computer keyboards and kick anything with a wheel attached. Reading manuals is for losers. Besides, have you seen how thick some of those manuals are! It would take a week to get through them… and then for some reason they switch languages!

“That can’t be right,” I muttered to myself as the three guys wandered off, clearly disappointed at my success. But the trolley was up and rolling, which was just as well as, A). I was due on the tee in 10 minutes, and B). there were no instructions in the box... although I did find them later in a plastic sleeve entitled 'Instructions'.

That was the first major plus for the PowaKaddy – easy and intuitive to assemble, with a minimal number of parts. And this from a guy who can’t even fold a newspaper correctly.
I was still convinced that during the next few hours something would fall off, collapse or leave me looking like an eejit.

Royal Porthcawl – apart from being one of God’s greatest gifts to links golf – is a tumbling, twisting affair. Bumpy fairways, short, sharp climbs, deep rough and deeper bunkers will give a trolley a severe workout, test its balance, speed, robustness and handling. 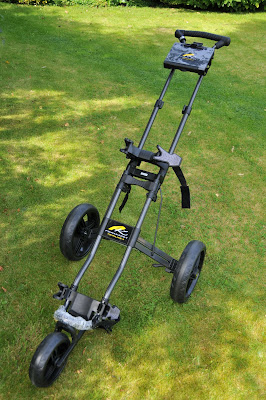 REVIEW
I did my research, read a bunch of stuff online and in golf magazines and liked the price - £119 from Direct Golf in the UK. It was ordered on a Monday afternoon and delivered on Tuesday morning to the UK address where I was staying. That’s what I call a speedy service.

A trolley’s purpose is to transport a bag of clubs around a golf course and take up as little room as possible in the boot of your car. To that end, the trolley did everything I wanted it to do but you’d think that one trolley is pretty much the same as the next. Quite possibly, but there are certain things that stand out…

Balance
There were no difficulties going up slopes or across the shoulders of bunkers and the handle is sturdy enough should you need to apply pressure when the slope becomes too steep.

You might expect the wheels to be wider – for wetter, wintry conditions – and time will tell on that front as these wheels are designed specifically to reduce ‘rolling resistance’. They work and also give the trolley a more streamlined look.

Weight
When in use it feels sturdy without it feeling heavy, thanks to the lightweight aluminium structure. My old trolley was so light it would blow over in a breeze – there’s no risk of that with the 7.4 kg Twinline, and yet it’s a lot easier to manage.

When folded up you realise how sturdy it is.

Storage
Wheels come off easily – if required – and with the quick release straps it is easy to remove your bag and then fold it down in four quick steps. True, like most things, it will take a couple of practice runs to figure out which step should be done first for maximum efficiency… Hint: the small lead wheel should be folded back/under before you collapse the main wheel braces.

Once folded, it has an easy and obvious carry handle, making it quick to lift and store in almost any boot.

I’ll also add – from prior painful experiences – that the Twinline 3 does not appear to have any nasty joints that can snap fingers, skin or other valuable parts of your anatomy. 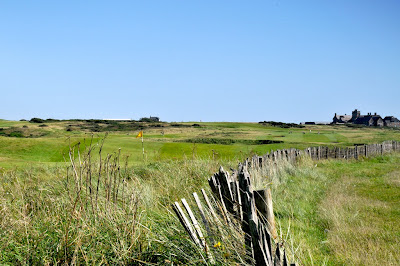 [Photo: Views of the course from behind the 3rd green at Royal Porthcawl]

Looks
I wasn’t convinced when I saw images of it, but in real life it looks good, and even better on the golf course. You can also get it in white, although that’s like putting go-faster stripes on your golf bag.

Alignment
Dead straight from the first push – such bliss – and if you do have problems, an Allen key is included to adjust the wheels. It rolls freely on its own and I released it down several bumpy slopes without any problems.

Other
The wide handle makes it easy to use single handed or with both hands – particularly useful going uphill. It’s a soft grip if your hands are of the sensitive kind.

The scorecard holder is a bit flimsy. To be honest I carry scorecards in my back pocket and I would never use something like this – too big a chance of losing the card or it getting soaked.

There’s a small foot brake, which is located on the inside of one of the wheels (see photo). Again, not something I’d use but it doesn’t seem to be that easy to get at. 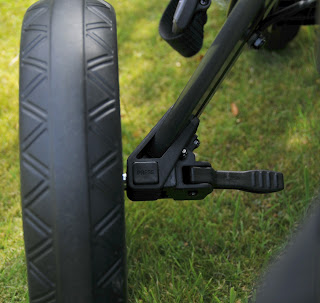 Value for Money
Considering the prices of other trolleys in the market, this has to get 5 out of 5. The PowaKaddy fulfils all of my requirements so I wouldn’t see the need to pay 250 quid for a top model – unless it’s prepared to take my putts for me.

Posted by Kevin Markham at 5:30 PM