Life as a Way of Golf, by Ivan Morris

After reading a few pages of this new book by Ivan Morris, two things become abundantly clear: the man knows a vast amount about golf; and he has never quite achieved what he was capable of.

Any and every golfer will recognise his feelings of frustration, and empathise with him. We all have our hopes and dreams when we walk onto a golf course, and few of us ever realise those dreams. His book is about far more than his personal trials and tribulations, however, and his take on golf in general is sharp and acerbic. With 50 years of golfing experience, playing at the top levels of the amateur game, he has a lot of knowledge to impart. 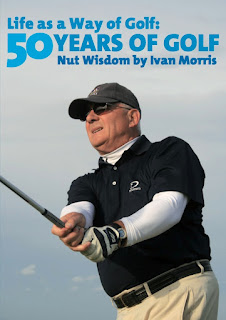 I don’t necessarily agree with him – nor he with me – and his on-off-on-again love-hate relationship with golf clubs (drivers, putters, etc.) is something I do not understand at all, but I wholeheartedly endorse his sentiments on the professional game, the R&A, golf courses and, particularly, the Olympics. He gets under the skin of golf and picks away at it mercilessly. No subject is safe.

As a youngster, Morris had promise, that much is evident in the very opening chapter, and he talks the reader through the years when he fiddled constantly with the mechanics of his swing to improve his golf and to gain greater distance. He discusses how he found his swing, lost it and found it again – also something that most amateurs will understand after a miserable round of golf – before realising that it wasn’t the swing that was the problem. It was Bobby Jones who said:

“Competitive golf is played mainly on a five-and-a-half-inch course…the space between your ears.”

It took Morris a long time to learn that - and in those learnings the reader will gain the greatest insights.

I have had the privilege of playing with Ivan, and I can tell you that he does not suffer fools gladly. He tells it how he sees it, which is remarkably refreshing when most of us prefer to ‘beat around the bush’. He is not a man you would want to hold up on a golf course – indeed, he blasts a few of the professionals for their slow play. 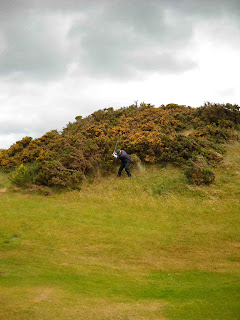 [Photo: Ivan ‘beats around the bush’ at The European]

Later in the book, his thoughts come through as a series of articles, which makes it easy to dip in and out. I read his chapter on the Olympics twice, to see if I could have been any more dismissive about golf re-entering the ‘Games’… I couldn’t.

It has to be said that with so much to say and a fairly short book to say it in, some of the chapters feel rushed – hence my comment about articles – certainly towards the end there’s a sense he has moved on to the next chapter without fully getting 'under the skin' of the previous one - like a thought unfinished.

Morris, I suspect, takes a lot of pleasure in his role as crotchety-old-golf-man (he describes himself as 'glum'), but scratch the surface and you’ll discover  his frustration. He has been golfing for 50 years – I am almost up to 40 – but I still learned a lot from the book. I see myself in many of his tales, especially when he revisits the ‘wudda, cudda, shudda’ mentality.

At the very end, he discusses Bob Rotella’s book ‘Golf is not a game of perfect’, and how it would have helped his game if it had been around in his early years. It is a book I’ve read and learned something from, but I never understood the title fully, and certainly not when that title could be used far more accurately for Morris’s book. Morris’s golfing life is far from perfect and that comes through loud and clear – so clearly, in fact, that every golfer should buy a copy and learn some of the hard-fought lessons that make up a golfing life.

Ivan has also written:
Only Golf Spoken Here
The Life of O'Reilly
Doonbeg Ghosts
To buy the e-book, link to Amazon

Posted by Kevin Markham at 2:06 PM

Email ThisBlogThis!Share to TwitterShare to FacebookShare to Pinterest
Labels: Doonbeg Ghosts, Ivan Morris, Life as a way of golf, Only Golf Spoken Here, The Life of O'Reilly