Going to the Irish Open?

For those of you lucky enough to be heading to the Irish Open at Royal Portrush, I hope you get 'soft days' and see some wonderful golf. I visited the course in April, and the place was shaping up beautifully. My recommendation on where to watch the action would be a spot between the dogleg on the 5th hole and the 7th tee. You get views of White Rocks, and golfers playing the brilliant 5th, the par three 6th, and tee shots on the 7th and 9th. 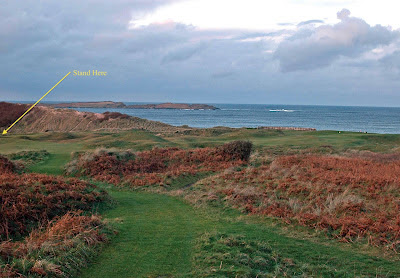 [Photo: the par four 5th. The green is away to the right]


So, if you're going, here are a few suggestions on ways to pass the time.


First of all, pick up the new (and only) guide book on Northern Ireland's 'Golf Coast' - which stretches from Roe Park to Ballycastle. You'll find it in some golf pro shops, local hotels and tourist offices. It reviews all 15 courses (including 9 hole courses) and suggests places to eat, socialise, visit and stay. And there's a cracking article about the joys of golf in NI, by me. 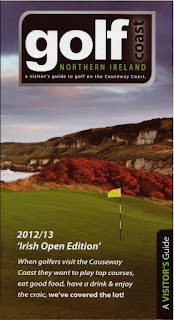 If you plan to play any golf, the obvious candidates are Castlerock and Portstewart. Exceptional links both, they are nearby and will give you a good idea of what the pros are up against. Castlerock has an 18 and 9 hole course, while Portstewart has three 18 hole courses. Slightly further away are the parkland tracks of Roe Park and Gracehill, and I consider Gracehill to be a real gem with lots of water. Roe Park has the advantage of having a hotel (and also has a daily bus service to the Open) so it's a tidy package. Then, of course, there's Ballyliffin on Inishowen, made ever more accessible by the ferry which crosses the Foyle from Magilligan in Northern Ireland to Greencastle (where there's also a golf club).


Chances are, though, that you won't get to play much golf as you're here to watch it. But you'll probably have time for a few things:


1. Visit Morelli's Ice Cream shops/diners in Portrush, Portstewart or Coleraine. This year the company picked up the award for Best Vanilla Ice Cream in the UK and Ireland. The Portstewart shop I dropped into at 11pm on a Saturday night was packed and the 'parlour' is a real throw-back to the 1950s. I picked up a scoop rhubarb & custard ice cream... but you'll be spoilt for choice. Dine inside or step across the road onto the promenade.


2. Places to eat: the Portrush clubhouse bar (the far end) sits above the 1st tee and offers spectacular views. There's a terrace around the entire outside too, and the food is good. For something classier and packed with character, try the Bushmills Inn. You won't find any accommodation left, but the restaurant has some bookings left - it is not cheap, but you get what you pay for becaue the food is superb. Lunch is served from 12pm. And then there's the whiskey and the distillery... 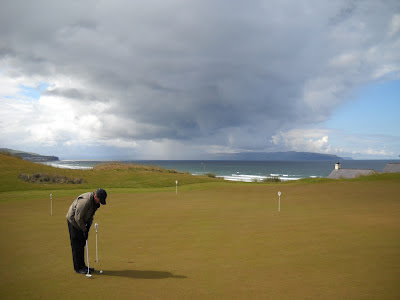 [Photo: some of the views from Portstewart Golf Club's new clubhouse]


3. Places to drink: the Harbour Bar in Portrush may prove impossible to get into, thanks to its popularity, but it's worth the effort - believe me. Then again, all the bars will be packed during the Open week, so any place is as good as another.


4. The Titanic Exhibit: probably too far away, in Belfast, but this is a special year and so it deserves a mention. The building alone is worth the visit, on the Belfast Docks.


6. The obvious: The Giant's Causeway is the most famous and, who knows, you might be able to scope out the landscape where they'll be creating the new, and still controversial, Bushmills Dunes Golf Resort which is now subject to another legal challenge.


There's also the Carrick-a-Rede Rope Bridge on the way to Ballycastle - but probably not after a few pints (see photo). The bridge links the mainland to the small island of Carrickarede. It is 20 metres across and 30 metres above the rocks.


And if you're this far over, carry on to Ballycastle Golf Club, climb the stairs to the top level, order a pint and take in the views across to Scotland and along the Antrim coastline. 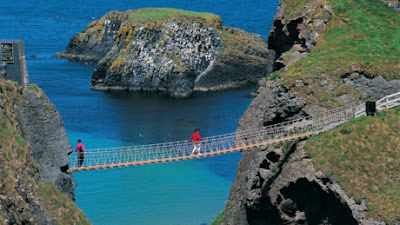