Waterville - a trip back to heaven 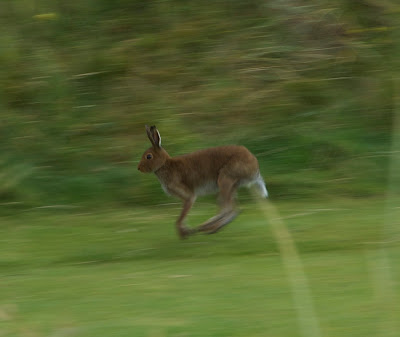 [Photo: the club's official mascot]
5.55am and my alarm goes off. I’m on holiday so it’s a bit of a brutal start to the day… but I’m heading for Waterville Golf Links, thanks to the very generous invitation of Noel, the General Manager. I asked to play early, to keep out of the way of fee-paying golfers, but I hadn’t really thought how early I’d have to rise and how long it would take me to get to the club from Parknasilla Hotel. 45 minutes is the answer.

Denis, the hotel’s night porter, had put together a breakfast for me – nothing fancy, but enough to get the day started. A 6 o’clock breakfast usually calls for quiet and a slow crawl to normality, but Denis was up for a natter. I cleared the cobwebs and learned some interesting facts: if you don’t already know, Parknasilla has a 9 hole course that is well respected. Denis told me that when the hotel was bought a few years ago (from the Great Southern), there were plans (and drawings) for an 18 hole course that would have torn through the woods and slipped between the new hotel lodges. 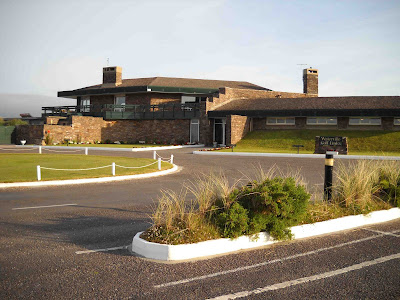 [Photo: Waterville's Clubhouse at 7am]

Truth is, I was delighted to hear that it never happened. After all, it’s not like we’re short of golf courses, and Parknasilla is a perfect hotel as it is, with its many coastal and woodland walks within the grounds.

Waterville Golf Links was deserted when I arrived – not exactly a surprise – and I was teeing off by 7am. The first hole is called the ‘Last Easy’ which is apt, if a tad misleading. It’s probably the most straightforward hole, but it’s not exactly easy. Mine was not a good start. It was too early for my bones and muscles to function as one. Still, after a first hole where the ball barely got airborne (not always a bad thing on a links course) I played the dogleg second hole in a more traditional fashion: a drive pushed right that shortened the hole but put me in the rough. I saw no distance markers so judged the shot by eye and hit a 9 iron that bounced short of the green and rolled up towards the hole. I walked about 20 yards and passed the 150 yard marker, which meant I’d knocked a 9 iron some 170 yards.

No, this is not about bragging, it’s about appreciating how differently a links golf plays, how a ball runs and how firing at pins is downright stupid (unless you’re hitting straight into the wind). I’m playing in the Atlantic Coast Challenge in a few weeks (over Carne, Enniscrone and Co. Sligo), so it was a good chance to practise sensible links golf. My second shot turned out to be a fluke and the dew on the green showed that I missed an eagle by an inch. When you’re used to parkland golf, it’s a battle to convince yourself to play low running shots. Sadly, it was a battle I lost on almost every hole. 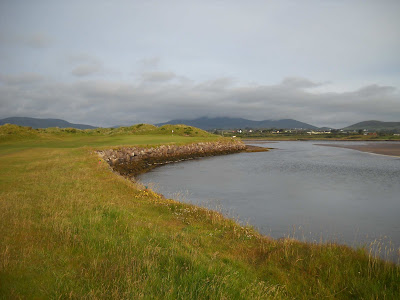 [Photo: the Inny Estuary wraps itself around the 3rd green]

I’m no loner on the golf course, but there are times when playing by yourself on a completely empty course is sheer bliss (I was out before the greenkeepers). Hares lolloped around me, the air was cool and crisp and the scenery was dazzling in the early morning sunlight. The Inny Estuary appears at the start (holes 2 and 3) and the end (16 and 17), before streaking out into Ballinskelligs Bay alongside 18. The best views are from the 16th tee. Or maybe the 17th, or 3rd – it’s hard to say, since they’re usually of the 360 degree variety with mountains rising almost all around you. If you want to see for yourself, visit the club’s website or click here for my 40+ photos.

Playing Waterville is always a privilege but on this particular morning it was heaven. It is the most attractive links in the country – of that there is no doubt – and it plays so sweetly from tee to fairway. There are only three holes here where a flag is not in view, which makes the gentle doglegs, rhythmic dunes and distant flags utterly mesmerising. Time and again you look across at the views and your eye is caught by fluttering white flags in the distance. 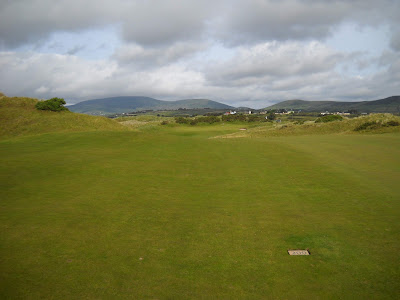 [Photo: Waterville's approach to 15, with some steep slopes around the green - a common feature]

The bigger challenge here is approach shots to deviously protected greens. Because so much of them is on display you think they’re more manageable than they are. It’s a brilliant piece of deception and may even be at its most cruel on the 18th green.

I have played here only twice (but would play here every day given the choice) but on both occasions I have been circled by helicopters as they arrive to deposit golfers. The course is far enough down some of the craziest roads that helicopter is the most viable choice of transport, and it certainly indicates that the American golfer is still coming to play Ireland’s great links courses. Long may it continue. The course is owned by Americans, who brought over Tom Fazio to redesign aspects of the course. His work is a triumph and evidently American golfers think so too. Personally, I see Waterville's success as Eddie Hackett's vision and Tom Fazio's precision. What a team they would have made. 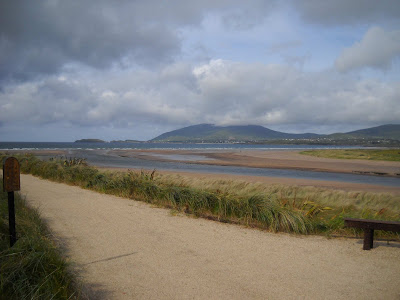 [Photo: views from the 16th tee, out over the Inny Estuary to Ballinskelligs Bay]

I walked in off 18, past the statue of Payne Stewart, and wished I was walking back to the first tee. It sure as hell beat the chaotic, violent drive back to the hotel. A statue of Charlie Chaplain stands in the centre of Waterville village and he gave me a grin as I went past: he knew exactly what the road held in store.

Posted by Kevin Markham at 8:01 AM