The Doc’s Dawn Raid is a great set up: invite 12 golfers to a top golf club, ask them to analyse a range of drivers by bashing balls for an hour, give them breakfast and then let them loose on the course. And how much does this treat cost? Zilch… not a thing, unless you count being filmed giving comments about a driver as payment. 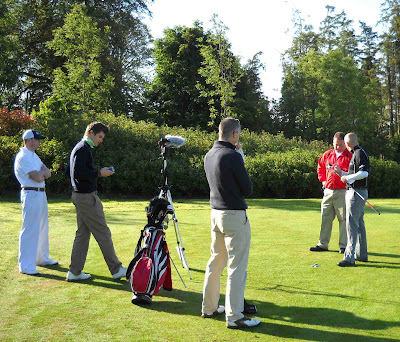 Golfbidder.co.uk arranges the day and the ‘doc’ (aka Donal, aka the Spindoctor) is the host, along with Tom from Golfbidder. You’re probably asking: what’s Golfbidder.co.uk? Why not follow the link and find out? The company has a simple set up selling golf equipment. They sell second-hand clubs (drivers, sets of irons, putters…) and these are given a rating (1 to 10) to indicate their condition. So, if you fancy some Ping i10 irons and you see that they’ve been given a rating of 8 out of 10, you’ll be buying clubs that are in really good shape and have been used maybe a handful of times. You’ll save a fair whack off the regular shop price and if you’re concerned about what you’re buying, there’s also a 12 month warranty and a 7 day return/full refund policy. So, whether you’re left-handed, right-handed or merely cack-handed, you’ll find it on their site.

There is nothing wrong with these golf clubs, so don’t be thinking that. What do you think happens to your old clubs when you upgrade? Sure, you can give them away, to your son or a friend. Or you can stick them in the back room, from where they will never resurface… no matter how much you promise yourself that they will. Or why not take a shortcut and just throw them in landfill. No, seriously, wouldn’t you prefer your clubs to have a second chance at happiness? If you end up part-exchanging your clubs at your pro shop, then it’s entirely likely that they’ll end up on Golfbidder. 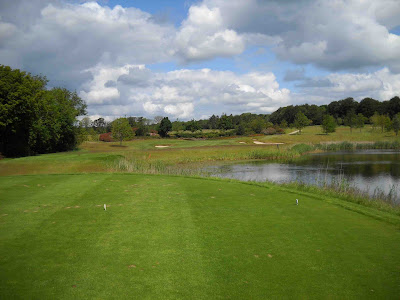 I’ve been very happy with my Taylormade R7, but I took a shine to a couple of Mizunos and the Wilson Staff Shockwave. Will I be getting one of these? Not just yet, but I do know that the Taylormade R11 that everyone is fussing over won’t be on my shopping list. With a driver, you know instantly whether you like it or not, simply from the look and weight. Hit a couple of shots and you’re hungry for more or putting it back in the rack. 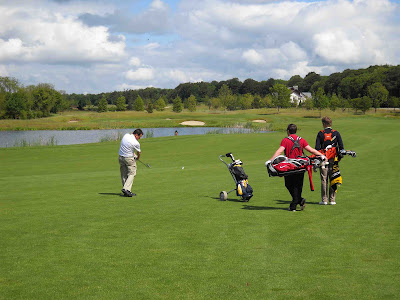 Yesterday’s event was held at the mighty Killeen Castle, home to the Solheim Cup in September. We kicked off at 7.30am, under perfect skies, and bashed away at range balls next to the Pelz Academy. Donal would grab some unlucky degenerate and put them in front of a camcorder to record their ‘driver’ thoughts. He then finished up with a message about Golfbidder having thousands of used clubs. Then came breakfast in the surprisingly understated clubhouse, and a deeply impressive breakfast bap.

We were divided up into fourballs, and I headed out with Tom, Michael and Eamon. John, from Killeen Castle, accompanied us to the first tee and suggested we play off the forward white tees. As it turns out, these are the same tees the ladies will be playing from in the Solheim Cup, so it gave us an interesting perspective. 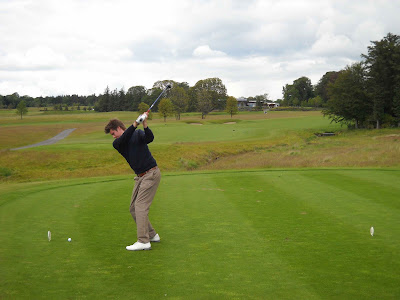 I played here two years ago and I liked the course. I won’t say I loved it because it didn’t quite capture my heart. It’s big and flash and corporate. Actually, it’s perfect in so many ways that it almost lacks soul…but in a good way. On almost every fairway if your tee shot is not going straight down the middle, you’re fretting it’s going to find one of a multitude of bunkers. Which is why it was a pleasure to play with Eamon. An effortless swing, with no fuss address, Eamon plays off +1 and you could see why. On a course he’d played only once before, he was putting for birdie on almost every hole and his drive always ended up on the correct side of the fairway to open up the green. I won’t say we were in awe, but take a look at the photo of Eamon in the bunker under the 14th green. The ball is plugged in the sand at about knee-height under the face. He has a look, pulls out a club, walks over and hits it. And leaves it two feet from the pin. Me? I’d have taken a shovel and started digging. 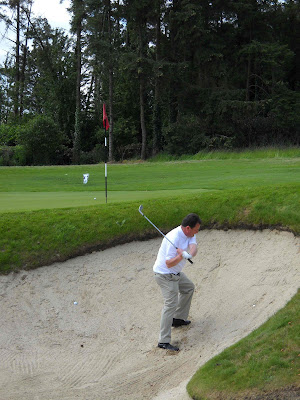 [Photo: Eamon works his magic on the par three 14th]

We all had our moments of brilliance; Michael had a wicked slice (bend your knees more, Mike) that never seemed to work when he actually allowed for it, but around the greens he was deadly; Tom, a lefty, hit some sublime irons although he’d left his putting boots at home; and Eamon was effortless. Me? I’ll remember one particular 6 iron that rolled to three feet to save par. But it was a fun and friendly day and it was a pleasure to play golf with the three of them.

Two things struck me about Killeen Castle: the greens were absolute heaven. There are some big swings and ridges, but they are as true as you could hope for… and yet deceivingly slow. They look like they should be lightening-fast (and aerial bombardment from the fairways left barely a pitch mark) but you have to be strong if you want the ball to drop. Secondly, we were all fooled time and again by the distances to greens. They are further away than they look and time and again we found ourselves landing short. When I say ‘we’ I exclude Eamon of course, who was always the last to play his approach and could see what kind of fools we were making of ourselves. 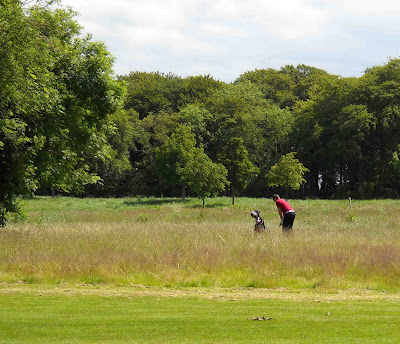 [Photo: Michael's slice lands him in trouble on the par five 7th]

On the 11th green, Eamon got talking to Mark Collins, the head greenkeeper, who told us that the green speed was going to be maintained for the Solheim Cup. Apparently the Americans don’t like fast greens… which begs the question: why are we playing into the Americans’ hands? Surely we should have the greens as fast as possible so that they struggle. Mind you, that’s a similar question to: why is the Ryder Cup played over a course that could be American-made (and was in the case of Arnold Palmer’s K Club) when it’s hosted in Europe?

The answer, my friends, is money!

And speaking of money… Killeen Castle green fees: Monday to Thursday it’s €100, Friday to Sunday it’s €125… if you have a fourball (or more), they are open to negotiation.

Find out more at www.golfbidder.co.uk (you’ll find loads of videos on Youtube as well), or visit Donal’s site: www.golfcentraldaily.com - sign up for his newsletter or keep a regular eye on his site and you could be in with a chance to receive a Doc’ Dawn Raid invitation yourself, here or in the UK. 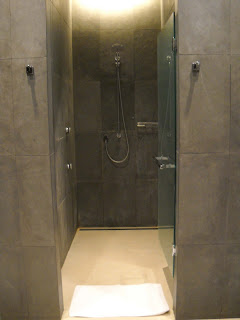 And finally, while I am usually reluctant to take my camera into a public shower room, on this occasion I decided it was worth the risk! Fantastic showers always make for a great finish, and at Killeen Castle you can even choose where you want the water to come from. Perfect.

Posted by Kevin Markham at 9:12 AM