Having not played the K Club for a few years, it was a bit of a luxury playing there twice in three weeks. This time I was a guest of the Washington Ireland Program (wiprogram.org), an organisation celebrating its 15th anniversary and choosing the Ryder Cup course to attract as many of its supporters (from Ireland and USA) as possible. 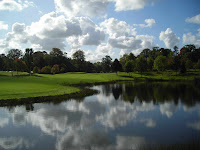 [Photo: Reflections over the lake from the 13th green up the 15th fairway]

It was another shotgun start so there was a whole crowd of people milling about the clubhouse. I’d spent an hour on the Smurfit course, taking photographs for my Flickr page, in the early morning mist, so I was a bit late. The first person I bumped into was Jim Carroll, a senior director from Accenture’s Washington office. I had never met him, so I was a bit surprised when he picked me out and introduced himself. I was then introduced to Liz Arky, his colleague, and the Managing Director of Global Government Relations at Accenture. I’ll see your job title, Liz, and raise you with one of my own: Direct Marketing Supervisor of Acquisition and Retention. 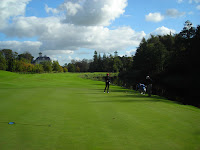 That was over 10 years ago when I was at One2One. Now I feel diminished just saying ‘freelance copywriter’. It turned out that we were playing together. I learned later that they had asked to play with me (after my book was given out at the WIP’s American golf event at Lake Presidential). Naturally, I was honoured, but later on I smelled a set up. The fourth member of our group, Mark Ryan, was from the Dublin Accenture office, and when I saw the golf club logo on his jumper, my blood went cold. Elm Park Golf Club. Not one of my favourite courses and, I’ve heard, one that is writing to my publisher to complain about my book review. I thought I was going to get it in the neck for the whole round, especially when I discovered we were sharing a buggy. I had visions of being driven into the deep rough and being set upon with a 7 iron, but it turned out that Mark didn’t know about the book so I was in the clear – at least until we got back to the clubhouse and he read the review in one of the copies that the WIP guys had accumulated. So I had 18 holes to breathe easily.

To say that our golf performance was distinctly unimpressive would be an understatement: Mark and I had similar rounds – bouts of great golf infected with total horrors; Jim and Liz were renting clubs and it took Jim – a mid teens handicapper – a good few holes to get the hang of his Callaways (he was hooking his irons on almost every shot); Liz is fairly new to the game and extremely enthusiastic. She’s caught the bug and has a swing that will take her far. She may also take Mark along as her caddie, such was the partnership they established. First of all, there’s an element of trust when you ask someone for help with a shot; second, you have to correctly interpret what you’re being told; thirdly, and most difficult of all, is being able to execute what you have been told. I suspect that these are challenges that Liz faces every day in her job, but being able to do the same thing on the golf course is a different matter entirely. Yet she did just that: on our first hole (the 6th) Mark gave her a line on the green and she sank it from 30 feet (welcome to the K Club); when she was stuffed under the trees on the 2nd, Mark pointed through a gap, recommended a club and told her to go for it – she did as instructed and put it about 12 feet from the hole (any pro would have been delighted with that outcome); on the famous par five 16th she hit three solid shots down the fairway, leaving herself 140 yards to the green, on the other side of a wide swathe of the River Liffey. “What do I do?” she asked. I replied with a question: when are you ever likely to be back? If you go for it and make it, I said, you’ll be dining out on the shot for a month. She decided to go for it, and Mark got to work telling her what and where to hit. Needless to say, she nailed it. Not only did it fly the river, it landed on the green. [I had a 120 yard shot and dumped it in the water – just to put things in perspective]. Perhaps the most remarkable display of her ability came on the par three 3rd. Liz ended up behind the green, on a down-slope, with the green above her. Her first instinct was a wedge, but Mark directed her to the 8 iron and a punch shot into the up-slope. This was not a shot Liz had ever played, but Mark pointed to a spot on the bank, gave her encouragement, told her to hit it with conviction and then watched as she executed the shot perfectly, the ball bouncing up the slope, onto the green and rolling to about six feet. Liz was ecstatic, Jim was celebrating, Mark was modest and I remained impressed at this golfer’s ability to follow instructions to the letter. She topped it off by getting a line from Mark and then sinking the putt. Magnificent stuff. My golf may have been rubbish, but I enjoyed the day and the company immensely. 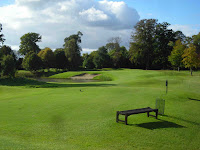 Before the golf started we were told by the K Club that they had set the course up the way it had been on the final day of the Ryder Cup – not the tees, obviously, but the pin positions. If you know the Palmer Course, here are three pin positions to make you nervous: on the Index 1 15th, the flag was in the very right hand corner, with the large pond in front, a pond behind, and maybe 7 yards in between. On the par three 16th, the flag was two paces from the Liffey’s edge. On 7, it was at the very back right of a 50 yard green that had only trouble behind and the Liffey on the right.

So, I was mightily impressed when the winners came in with a score of 95 points – the competition was stableford, full handicap, with three of the four cards to count – an unusual and testing format. 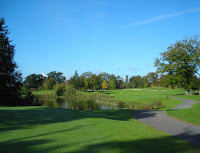 It was a beautiful sunny, warm day and everyone enjoyed the event. For my part, it was thrilling to play the course in such great condition and it was a lot of fun meeting many of the people I met last year at the same event in Scrabo. Many of them are WIP Alumni (Nick, Jonathan, Robert and Shane), or WIP people (Bob), but I also met others so it was a very friendly affair. It does go to show how important a ‘good laugh’ is when it comes to golf. When I was at the buffet lunch (not the best, it has to be said) one of the guys on the table asked me what I thought of Ballyliffin. It’s a great course but he stopped me and started talking about the service – he and his pals had been treated brilliantly and that’s what he remembered. It says a lot and any clubs out there who have their heads too far up their arses should take note: real customer service makes people remember you, adore you and spread your name.

At the end of the prize giving (we didn’t figure!) there was a raffle that had numerous small prizes, including several copies of my book. Each winner was allowed to pick a prize of their choice. Near the end, there were four prizes left: one Belleek candle holder and three copies of my book. I like to think that everybody already had a copy, so that’s what I keep telling myself.

There was also an auction of a couple of fourballs: Druid’s Glen and Lahinch. Liz and Jim won the latter… I’m waiting for my invitation!

I wasn’t able to make the evening meal, which was a substantial reception at Dublin Castle hosted by President Mary McAleese, but there were over 300 people attending, including TDs and a number of Ambassadors. 15 years on and the WIP is still gaining pace.