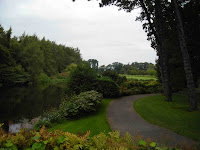 [Tomas Bjorn came to grief here on the 17th hole a number of times. The forward tees aren't quite so dramatic]


Under the cover of darkness, with my bag of equipment, I crept into the enemy’s lair. Despite the blackness I could see the building in the distance. I approached slowly, as silent as a fox, slipping between the Bentleys, Jaguars and Porsches. Oh yes, this was the right place.

My feet were silent on the tarmac, each step slow and graceful. I had purchased the exact footwear for my needs only the week before. I’d asked the girl for something comfortable and practical; she’d sold me a pair of brown Ecco loafers. I reached the edge of the car parking area and was about to step onto the grass when I stopped. It wasn’t the infra-red beams that worried me… it was the dew on the grass. So eager had I been to ‘wear-in’ my shoes that I had not yet polished them, and I was reluctant to get the leather wet in case the water left permanent spots. I shook my head – it was no time to worry about that now. I moved on.

I had advanced only a few yards when I heard voices. Without thought for my safety I dived into the bushes. As I rolled into a crouch, something as sharp as a needle pierced my calf, sending a jolt of pain through my body. I bit my lip to stifle the cry of pain. It was white hot but I could not move, for the two men were now only feet away.

After they’d gone, I looked down to see what had caused me such agony. I winced and held back the tears as I spied the nettle piercing my khakis. I’d have to get some Anthisan ointment on that soon or it was really going to sting. I freed myself and limped through the undergrowth, brushing aside the roses, pampas grasses and rhododendrons. Ahead of me were more men – four in all. I reached for my gun but it wasn’t there. Then I remembered I’d left it in the car. Then I remembered I didn’t have a gun. This wasn’t America, a country where the Constitution says every man has the right to arm bears.

Finally, the men moved on. I looked across at the steps only a few paces away. I could make it. Bolt-like I sprinted across the grass, bounding up the twelve steps one at a time until I reached the top. It was exhausting and I bent over to catch my breath. But as I did I noticed movement behind the double glass doors. I quickly slid behind a potted bay tree on the veranda, hiding my bulk by facing sideways. I tried to breath in but that last tub of Haagen-Dazs had been a tub too far.

The doors were opening. Frantically I looked left and right. To the left was a sheer drop of five feet – far too dangerous at my age – but to my right was a golf cart with golf clubs in the back. It was four paces away and down the steps. Even with my injured leg and wet shoes I could make it. I gritted my teeth and prepared to launch myself but I was too late.

“Sir? Hello, sir?” The man standing in the doorway was talking to me. He stepped outside and held the door. “Are you coming in, sir? It’s a beautiful morning for golf.”

“Um, yes,” I muttered, trying to act casually as I slipped off my shades. “Thank you.” I walked inside.

The man looked down at my wet feet. “Nice shoes. Are those the new Eccos?”

I was inside, not as I planned, but here I was all the same.

“Are you here for the DCU Alumni outing?” the man asked.

When I nodded he pointed downstairs. “You can check in down there.”

Downstairs was another man, standing behind a table. He smiled and shook my hand as he introduced himself. I told him my name in a low voice.

“Ah,” he replied in understanding, and we both looked up and down the corridor.

“I have them here,” I said, passing over the bag.

“Good, good. I’ll make sure they get to where they need to be.” He took the bag and slid it under the table, checking that he had not been observed. He gave me a nod, indicating it would all be taken care of, before I skulked away.

And that was how four copies of my book made it onto the prize-winners table at the K Club.

I left DCU (Dublin City University) 19 years ago in 1990, and, as a graduate, I was invited to the DCU Alumni golf day at the K Club. I’ve played the Palmer course several times over the years but it was a chance to look at it again after a lengthy absence. Of all the clubs in Ireland, the K Club inspires the most debate. Just how good is the 2006 Ryder Cup venue? 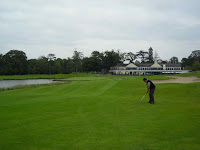 I am not the club’s most ardent supporter (the headline in my book asks if the K Club is ‘the most pretentious club in Ireland’), but that has less to do with the quality of the course than the whole air that exists around the clubhouse and the ridiculous green fees. In the current climate, I’m happy to say that the green fee has been slashed. It is now, in fact, very good value.

The DCU Alumni day was the whole nine yards: BBQ lunch, shotgun start at 1.30pm, followed by drinks and dinner in the evening.

After I handed over the books to Gerard Kiely, the man in charge, I bumped into an old classmate, James, who appears to spend half of his life flying around Europe as a financial consultant. I can only assume that the other half of his life is spent waiting in airports – Dublin specifically. We had lunch and talked about the 20 year reunion which is planned for September 2009, and who we are still in touch with.

And then everyone playing golf (James wasn’t one) piled into buggies and headed off to their nominated tees. I was playing with Joe and Leo de Courcy, and Ciaran O’Reilly, none of whom I’d met before. I understand the need for buggies when it comes to a shotgun start, but I never use them. For me, golf is a sociable game that requires communication with other golfers. Obviously, while I was writing the book, I played a lot of golf on my own, but when you’re playing in a fourball it’s good to talk. Buggies make that difficult as you tend to see the other pair only on tees and greens and it’s too noisy in the buggy to talk to the guy beside you.

Considering what I wrote in my book review, it was ironic that we started on the 17th, where Tomas Bjorn came to grief during the European Open. We did not emulate Bjorn’s mishaps, but three points was far from a promising start. 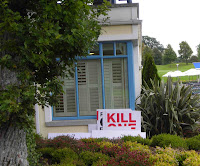 Six points on the 18th, however, raised our spirits. From there, we headed to the 1st tee and as we passed the clubhouse I noticed a large but partially-obscured sign leaning against the wall (see photo). Now, you can call me paranoid, but the first thing that went through my head was that the K Club knew I was playing that day and had made signs especially for the occasion.

It didn’t take long to realise that we weren’t going to be challenging for prizes. Joe and Leo were off 24 and 23, and while some days that can deliver some huge scores, this was not their day. Leo had a particularly difficult time: he is a member of Connemara, a rugged links on the west coast where there is not a single tree or any water on the course. The K Club offers plenty of both, and it was a rare hole when Leo did not find one or the other. Or both. At dinner that night he made it quite clear that he would not be venturing onto parkland courses again anytime soon. That said, he did manage one remarkable feat, playing the 11th and 12th holes in one shot. A tee shot from 11 sailed wide and left and landed perfectly on the 12th green. When we came to play it a few minutes later he made par! 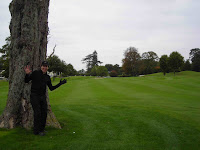 On the 1st hole, Ciaran hit his ball in the rough and while we were looking for it, Joey found five balls. Good balls too (you’d expect no less at the K Club). I congratulated him, as you do, but he was quick to point out that he would lose them all before the day was out. And sure enough, he did. Our total lost ball count was at least 18.

[Photo: Ciaran is shocked at the fate of my drive on the par four 9th]

Ciaran, off 17, had a varied day. Some cracking shots (a perfect birdie on the par three 3rd made his day) were mixed with drives that generated divots of Lee Westwood proportions. After one particularly deep one he explained that he was practising for the National Ploughing Championships that weekend. He practised a few more times, too. 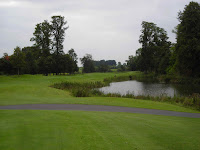 It was a lot of fun, and that’s what it’s all about. Perhaps my only complaint was that we played off the forward (society) tees. These are 500 yards shorter than the middle, visitor tees and that makes a difference in terms of the challenge. I’m not bragging, but when you play the Index 1 hole with a drive and a wedge, it defeats the sense of achievement. I know my playing partners weren’t complaining, but when I play there next month (yes, I’m going back) I’ll play off the white tees, regardless.

Because it was a shotgun start, it meant there were 60 guys vying for 5 showers. It’s not often you see such a lengthy queue. The K Club staff were in and out bringing new towels and taking away the wet ones. The lad beside me turned around to put on his shirt and by the time he turned back his towel was gone. Then again, that may have been because we had just been blinded by the cloud of talcum powder he was applying.

The food was good, the entertainment and chat was good and I doubt anybody had any complaints – although the team that came third might disagree as their prize was a copy of my book. (The winners had 89 points; we had 68.) It was great to be able to play the course in such good condition and the boys were excellent company. Regardless of how you look at it, that’s what golf should be about.

Posted by Kevin Markham at 5:35 PM