Golf Show at the NEC 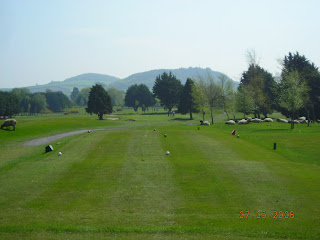 I got up at 4am to catch a flight to Birmingham for the Golf Show at the N.E.C. Not my best time of day and having parked, taken the bus, waited patiently to go through Security (asking myself where all these people are going at 5am) and then walked only a few short miles to reach the departure gate, I was anticipating a well earned snooze.

Have you seen the movie Airplane? Remember at the end when the out-of-control plane lands and swooshes past the nominated departure gate, and passengers rush from one gate to the next as the plane fails to stop? We had that at Dublin. Well, sort of. I was sitting at gate D72 when a murmur spread through the long queue. Someone had seen the departure board which indicated that our gate had switched from D72 to C61. Panic set in. Bags were plucked up and people began to hurry away down the concourse. The running of the bulls came to mind, especially the elegantly suited man who had been first in the queue and was now running with coat tails whipping behind him. Me? I stayed where I was, as did a few others. Ryanair don’t go anywhere near C terminal, and with 20 minutes before departure I doubted we were going to be sent to the far extremes of the airport – and if we were they could damn well wait.

It started low: a waterfall of indistinct sound that turned into a hissing of polyester and staccato heels as the flock returned at full speed, mister elegance in the lead. The gate change had been a mistake and the hoards were upon us once again. I thought, fleetingly, that the suited man was going to cry when he discovered his cherished front spot had been taken. He was now well back in the queue and he kept leaning to the side to look at the spot he’d once stood. And yet – and this is the remarkable thing about Ryanair – when the plane took off, every single one of us was on board. What’s more, the plane landed 35 minutes ahead of schedule and was announced with a dramatic fanfair over the loudspeakers. Not ideal at 7.10am.

The show opened at 10am and there was a queue of maybe 200. A good sign. Inside, the key focus of visitors was the longest drive, various putting competitions and the latest golf clubs. By about 10.02am you could hear the constant sound of balls being hammered into driving nets. The 100 foot putt challenge was also popular, offering free weekend breaks to anyone who could sink the putt. And it wasn’t easy! The carpet was obviously rigged against you and five feet in front of where you started, balls were hopping gleefully in the air. There were plenty of clothing suppliers, new gadgets to help you improve your game, including one putting gizmo where you blindfold yourself (I have yet to play a round blindfolded, but maybe you have), tour operators, buggy suppliers – check out www.stewartgolf.com for the new porshe of buggies. They even had one spinning on a glittering dais. Oh, and Bank of Ireland, obviously, with some rather aggressive sales people.

The purpose of my visit was to attract advertising for the book. There are probably four spaces (inside covers and in the middle where the photographs will appear) and this seemed like a good environment to talk directly to the relevant people. Clothing and club manufacturers seemed like the perfect place to start, along with the tour operators who send their clientele to Ireland. I spoke to several people and handed out cards, but it didn’t help that on my first attempt I asked where in Australia the guy was from and he replied, Guildford in Surrey. That slowed my momentum and getting that why-are-you-talking-to-me stare a couple of times never makes it easy. But, all in all, it was a positive experience. Only one Irish body attended – Golf Ireland Midlands – promoting the Laois International Golf Challenge which embraces some excellent midlands golf courses (including Portarlington and The Heath) and a Final at the Heritage (co-designed by Seve Ballesteros). 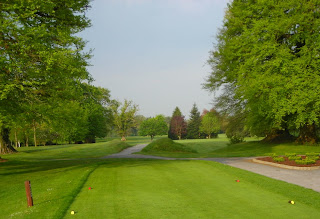 Coming back was an interesting experience. A big soccer game had been on and a few dozen Irish fans were returning home, many of them the worse for wear. The flight was noisy and the safety demonstration was drowned out by people going ‘shhhhh’ and then giggling like schoolgirls. I was blessed to have a gentleman beside me who liked singing. He only seemed to know one song. Actually, he only knew five words and he slurred them eloquently: “We always beat West Brom”. Fascinating.

I do not like soccer. For one thing, is there any other sport where fans sing songs about the opposition, the opposing fans and the referees, constantly calling them ‘scum’ and ‘bastards’ and a whole lot worse? The song of choice on my flight was Band Aid’s “Do they know it’s Christmas?”, with ‘scum’ being some part of the chorus that I couldn’t make out.

I simply don’t get football. The beautiful game? I’d rather stick needles in my eyes. Or, worse, watch synchronised swimming.