Massereene – You Can Not Be Serious 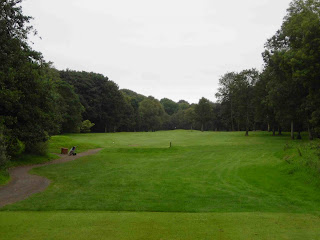 My trip to Massereene was an interesting one. Gary, the General Manager, had asked that I park my camper up in the Lady Captain’s parking space as the following morning was the start of the President’s Prize. It was one of the club’s big events and meant that I had to be on the tee by 6am. That was all fine with me, and Gary passed the word around to the relevant people that I would be parked overnight.

Only, the word didn’t reach a few members. A few very drunk members, who decided, at midnight, that my camper van was a problem. After the door was almost banged off its hinges, I was confronted by two men – one so drunk that standing upright was a challenge. “Are you serious?” he asked.

Serious about what, I replied. He meant me parking outside the clubhouse, so I explained that it had all been cleared with Gary. That seemed to do the trick and they headed off.

Then I heard another member of the group giving out that just because I knew the name Gary, didn’t mean a thing. I felt inclined to point out that if I was trying to park on the sly, I wouldn’t park within five feet of the clubhouse, under the security lights, in the Lady Captain’s parking space. Especially when there were plenty of places that were out of sight. But then logic and alcohol are not exactly bosom buddies. Eventually they headed off in their cars and I went back to sleep.

At 2am there was another knock on the door, and I admit to being a little nervous. But it was the police, who had been informed that something suspicious might be going on. A bit of bad parking I admit, and some dodgy shorts, but nothing to worry about.

Not surprisingly I slept through my alarm and arrived on the tee late. 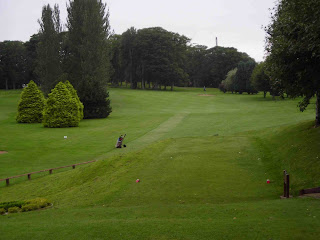 One of the greenkeepers was bringing out the buggies and he said that the flags would be put out on the greens very shortly. The first flag I encountered was on the 7th, and what was my score at that point? Five pars. Clearly, taking the flag away makes hitting the green a far easier proposition. On the Index 1 6th, I hit my second shot to two feet with no idea where the hole was. Forget about Power Golf – try Flagless Golf instead.

Massereene has a great pace to start off. As someone who doesn’t like too many doglegs – it can get monotonous and frustrating – I was surprised I liked Massereene as much as I did. Take away the par threes and you see only three flags (4 and 17 are the two best holes on the course, while 12 is the tamest), yet there is so much going on around you that the shots are still rewarding. And that says something for the course.

If you read any of the club’s literature it will tell you that it is part links – but while this may be true (the holes were reclaimed when the Lough’s water levels fell) it is slightly disingenuous as there are no ‘links’ features. Just so you don’t turn up expecting dunes and tossing fairways.

After my round, Gary appeared and I told him about the events of my night. He was a bit embarrassed as he’d told a lot of people and it had been raised at a Council Meeting that week. But, at the end of the day, I was impressed that the members felt the obligation (and alcohol-induced bravado) to challenge me. When I worked in London, a guy walked in off the street, said hello to the Receptionists, walked down to the basement and picked up a case of 12 whiskey bottles (one of our clients). Then he walked out saying hello and goodbye to people as he went. It never occurred to anyone that he was a thief because he acted so normally.
Posted by Kevin Markham at 8:07 AM