Which is Ireland’s Best Golfing Bar?

The Wicklow Wolf Golf Championship at Druids Glen aims to answer that question.
Now, this is a smart gem of a marketing idea. What better way to promote your beer – and Wicklow Wolf is one of the best craft breweries out there (if you haven’t tried the Elevation Pale Ale, it’s heaven) – than doing a tie-in with Ireland’s most thrilling parkland course. For golfers, it’s the best of both worlds.
The first ever Wicklow Wolf Golf Championship will be held at Druids Glen Golf Club on Thursday 26th April.

The competition has been set up to find Ireland’s best golfing bar and is open to teams of two, male and females over the age of 18, who will represent their local bar or pub. The maximum handicap allowances men 28 and ladies 36.
On the day there will be two separate shotgun starts one at 9am and one at 2pm. I don’t envy those golfers who find themselves starting at the 13th or the 17th… or the 18th for that matter. All brilliant holes but utter knee-tremblers too.
The entry fee is €200 per team which includes complimentary range balls, a goody bag including Wicklow Wolf Pale Ale, dinner and prize-giving.
The winners will receive a special Wicklow Wolf Golf Championship winner flag to fly from their local bar, the Championship Trophy (to be held for one year), a golf outing for 20 people at Druids Glen, complimentary PGA professional golf clinic and three kegs of Wicklow Wolf Pale Ale for the local pub or bar entered.
Tasty prizes, yes! 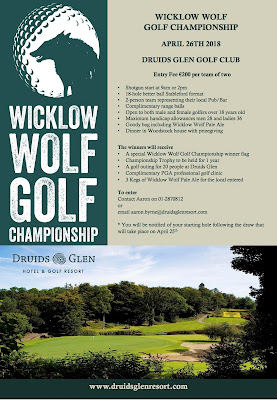 To enter contact Druids Glen Golf Club, 01 287 0812 or email aaron.byrne@druidsglenresort.com.
Participants will be notified of their starting hole following the draw that will take place on 25th April. Fingers crossed it’s not one of the three mentioned above.

Posted by Kevin Markham at 5:11 PM