This is a first! And it's a big boost for the  Irish Open which has been growing in stature since Rory McIlroy added his support a few years ago. Now part of the lucrative and prestigious Rolex series (which guarantees a $7 million prize fund), the Irish Open will host a qualifying event for the first time in the modern era. Four places will be up for grabs and those qualifiers will then head straight from the qualifier to the Irish Open.

They won't have to travel far, either. The qualifier will be held on the daunting Sandy
Hills course, at Rosapenna Golf Resort, on June 30 and July 1. The Dubai Duty Free Irish Open will then be played over the Glashedy Links at Ballyliffin, from July 5-8. These are two of Co. Donegal's gems. 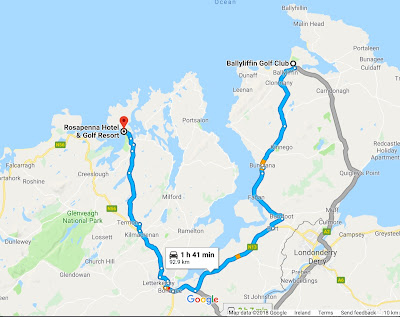 Those four qualifiers will then be well prepared to tackle the Irish Open course, especially as both links were designed by Pat Ruddy. They'll have a little inside knowledge to accompany them as they drive from Downings to Letterkenny and then up onto the Inishowen Peninsula. It's less than a two hour drive.

The format of the qualifier will be a 36-hole shoot-out with a €40,000 prize fund.
All PGA in Ireland members and registered assistants will be eligible to compete in the event. Six places in the field are open to amateur players nominated by the Golfing Union of Ireland, with a further 12 spots to be filled by professional golfers selected by the European Tour.

PGA in Ireland secretary Michael McCumiskey said; “This is a new era for Irish golf. Through the auspices of Dubai Duty Free and the European Tour a qualifying round for the Irish Open is being staged for the first time in a long number of years.

“It will present a welcome opportunity for established and aspiring professionals plus a number of Ireland's top amateurs to pit their skills against one another as they try to secure one of the prestigious spots in the Dubai Duty Free Irish Open at Ballyliffin.
“For those who wish to test their skills, the Pat Ruddy designed Sandy Hills Links at Rosapenna Golf Resort will present a demanding, but interesting challenge come July.”
The Sandy Hills Links at Rosapenna opened in June 2003 and has steadily risen up the various Top 100 listings across the UK & Ireland. It is currently ranked 10 in Ireland by Golf World. Originally laid out by Pat Ruddy and later modified by Beau Welling Design (2013), this modern links is a great test of golf in one of the world's most beautiful settings. The Old Tom Morris course alongside is celebrating its 125th anniversary in 2018. This is a resort packed with history and quality.

The resort's prestigious Scratch Cups have been won by the likes of Rory McIlory, Colm Campbell, Dermott McElroy and Eddie McCormack among other top Irish Internationals.

Competitors will be able to make use of an official practice day on Friday June 29. In the case of a tie for the leading four players a sudden death play-off will be used.

Posted by Kevin Markham at 9:29 AM