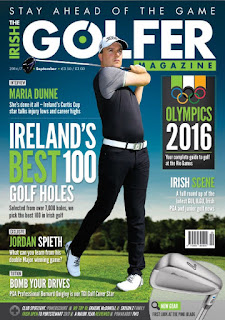 Yes, it had to happen... and happen it did in the current issue of Irish Golfer Magazine. A list of Ireland's Best 100 Golf Holes has been published and the nit-picking has begun. Is anyone surprised? No, of course not. Everyone has their favourites... which is as it should be.

The list was devised by Ally McIntosh (golf course architect) and me (gobby, opinionated golf writer) and after reducing over 7,000 holes to a mere 200 the real work began. It is frustratingly tough to get to that 100 number. Several of my favourite holes didn't make the cut for one reason or another - Druid's Glen par three 8th, Athlone's par four 13th,
Ballycastle's par four 6th, Macreddin's par three 4th... or 17th for that matter. I have no doubt Ally would say the same. But that's the way it goes.

So here's a link to the top 100 holes, with brief descriptions of each hole and a top 18 scorecard for both Ally and myself of our absolute favourites: Irish Golfer Magazine September Edition.

And here are some of the contenders to whet the appetite.

The only question is... which ones have you played and which ones do you think have been missed out?

Posted by Kevin Markham at 8:37 PM