Give Tullamore Golf Club Its Dew 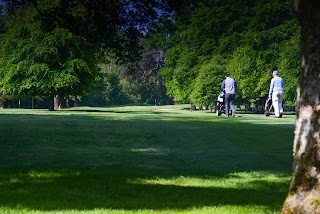 For some it might seem a coincidence, for others simply fortuitous, but Tullamore Golf Club and the world-renowned Tullamore Dew whiskey distillery are little more than a crisp five wood apart. Such coincidences are common in Scotland, but in the centre of Ireland it is far less frequent. Perhaps that is why Irish whiskey, unlike Scottish
whisky, is spelled with an ‘e’. The ‘e’, you see, stands for everything. As such, other distilleries were not required.

This is rich golfing country and it doesn’t get much richer than the course which lies just to the south of Tullamore town and calls Brookfield home.

James Braid (1870-1950) was a Scottish golfer and golf course architect. He won the Open Championship five times between 1901 and 1910, and he is responsible for designing over 200 courses, most of which are in Great Britain. His most famous course designs are Carnoustie, Royal Aberdeen and Gleneagles (Kings), but there are many more.
He made several visits across the Irish Sea between 1928 and 1938, designing Kirkistown Castle, Bangor and Bentra, in Northern Ireland, and Howth, Mullingar, Grange and Waterford, south of the border. Included in that list is Tullamore Golf Club, which he designed in 1938. Braid’s design philosophy focused on shot strategy and he believed every hole should force golfers to question their approach tactics. Such traits can be found everywhere at Tullamore. Braid is also widely regarded as the inventor of the dogleg… something you’ll find in abundance at this fine and colourful Co. Offaly parkland.

The course is known for its intelligent routing and mature trees, and the doglegs show off both to full effect. Indeed, the trees give this course its backbone, its protection and so much of its beauty.

The history of the course dates to 1896, but the club moved to its current location in 1926. Tullamore Golf Club celebrated its centenary in 1996 by inviting the golf architect, Patrick Merrigan, to revise certain elements of the course. Braid’s strategic values and vision were maintained, but Merrigan introduced three lakes, seven new greens, and new tees and bunkers. Some 5,000 trees were planted to complement those clusters of mature oak, beech and chestnut trees that have been growing here, on the Charleville Estate, for over a century.

Tullamore is a proud and popular club and its name is whispered in reverent tones wherever you go on the island. A quality and thrilling parkland it may be, but many outside the area still regard the course as a hidden gem. It holds an aura over visitors that makes them want to brag about its brilliance but not too loudly… for fear that too many others might head to Ireland’s epicentre and steal their tee time.

A round of golf is highly recommended as you will find yourself tested in every facet of the game. There are eight significant doglegs, five of which move left to right, but several others have enough shape that finding the correct side of the fairway is essential if greens are to be opened up. It places a premium on accuracy off the tee. There are fairway bunkers, but it is those around the greens which will cause the most angst if you are forced to watch your ball heading towards them. One reason for this is the greens. Beautifully shaped, the putting surfaces are meticulously maintained but you are unlikely to find many flat putts. And with some of the slopes, bunker and chip shots can take on whole new dimensions of difficulty. You’ll want to have a good day with the putter.
I sometimes wonder if greenkeeping staff hide in the woods with a camera to film the attempts of golfers who have been too greedy or wayward on the 197 yard 12th, one of the course’s five par threes. The green is squeezed tightly by two bunkers and you could play back and forth from one to the other without ever touching the silken putting surface… I know I did. The best tactic, should you require a tip, is to play short and left. It is Index 7.

But golfers will have the last laugh for this is as entertaining a game as you could ask for and the greenkeeping staff must be rightly proud – as must the members – of what they have in this par 70 course. It may not be hugely long (6,472 yards, back tees) but it satisfies a golfer’s appetite, whatever their ability.

Golf clubs typically wax lyrical about their signature hole, but Tullamore have a quandary… for there are several of such holes. The 5th, 13th, 16th and 18th holes in particular, provide the visitor with an unforgettable challenge.
The par threes measure 148 to 197 yards, with four of them over 178 yards, with the 12th, already discussed above, being the pick of the bunch. It is the 16th hole, which stands out most for me. Not only is it a sweet right to left dogleg with a glorious downhill approach shot to a green raised high above a stream, but it also signals the stunning climax, which finishes par four (index 3), par three, par four (index 5). Fail to beat the doglegs on 16 and 18 and any chance of par goes up in smoke. Strategy is paramount, so pay your dues and use your head as you tackle this sweet parkland.

For a full set of photographs follow this link: Tullamore Golf Club