US Masters - The Fashion Show 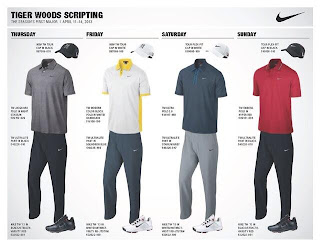 Is it just me, or does anyone else feel slightly defiled by the big sports companies' promoting what the world's greatest golfers will be wearing on Augusta's fairways?

Here we have Tiger and Rory (and all the rest) turned into living dolls to prance around and promote their big sponsors.  Oh sure, you'll tell me that they've been doing that for years - I know, I know - but isn't golf supposed to be about... golf?

Promoting golf clubs and balls I understand - they're critical elements of the game - and if you really want to stretch it, I appreciate that some clothing is better than others...

... but do we really need to know 10 days ahead of time that Bubba will be wearing red, white and grey stripes on Thursday, that Schwartzel will be wearing pink on Friday and Sergio will be head-to-toe in green and white come Sunday? I see that Rory is wearing pink on Saturday, so I sure as hell hope he doesn't mix up his days like he does his tee-times or Charl and Rory could be wearing identical outfits on Friday. All that pink is going to hurt the eyes.

And what if Tiger wakes up on Friday and decides he doesn't feel like wearing his scripted white/yellow shirt. What if he decides to swap it with Saturday's blue shirt? Won't millions of Nike-addicted TV viewers be confused?

If you think this is all a bit of a joke then check out Nike's latest ad, where a bunch of slightly embarrassed-looking Nike golfers (Michelle Wie, Paul Casey among them) are introduced to three different clothing lines.

I almost choked when the Nike guy discusses a shirt by extolling the virtues of Striped-fit Fabrications.

I had to replay it to make sure I heard correctly, nor could I find the term on Google. Striped-fit fabrications... doesn't that just mean your shirt has stripes on it?

And what about all those other golfers who don't warrant such attention from their sponsors? Heaven forbid that they'll have to get up in the morning and make a decision as to what to wear: Is it 'blue and green should never be seen... or green and blue will always do?' Crap, I'll wear pink. No, dammit, that'll clash with Rory.

I'm really looking forward to next week's Masters. It's a highlight of the golf-viewing year, but I swear if one commentator mentions what a golfer is wearing...

Posted by Kevin Markham at 9:45 AM

Email ThisBlogThis!Share to TwitterShare to FacebookShare to Pinterest
Labels: US Masters